I spent last weekend at the ALDHA-West Ruck in Cascade Locks. What’s a ruck you ask? It’s on of those German words we’ve appropriated that means backpacking. Although Urban Dictionary tells me it’s a fight, a rugby term, and some other much less inspiring definitions.

Anyway, it was a blast. There were old friends, quite a few hikers who will be on the CDT this year, and I had a chance to sell a bunch of hikertrash stuff.

We love our Purple Rain Adventure Skirts! Oh and Mont-bell put in a good showing among the thru-hikers too. Me, Jill, Focus & Allgood (Focus will be on the CDT too this year, I hope we get to meet up at some point!)

These guys. It was great to catch up with SoFar & Lint. 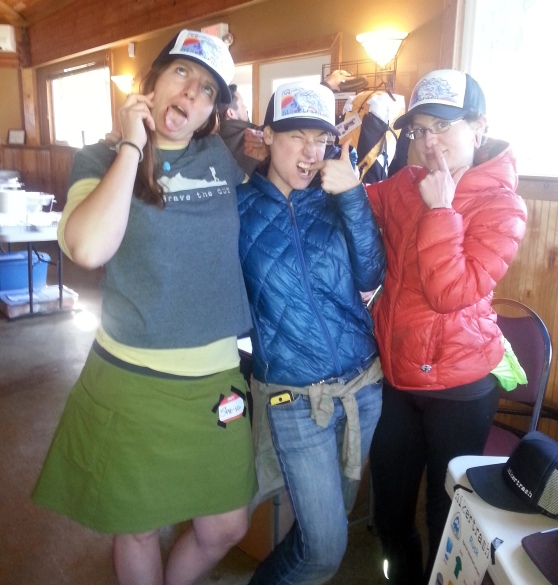 We were trying to look like hikertrash here. Focus & Justa bought our new hat. I had a lot of fun designing this one, should be available for sale in the next month or so in our store.

Six Moon Designs also unveiled their answer for the bankrupt GoLite’s very popular Chrome Dome. This is the Silver Shadow (guess who designed the logo!!). This too will be available in the next month or two.

Oh man, every since we worked together as metal roofers one rainy January in Portland I have missed these two. Love these guys. Metal roofing in January? I wouldn’t recommend it.

So lots of catching up with friends, bolstering my business with new sales, and above all else, getting FREAKING EXCITED to hike the CDT.