I blame my need for adventure on a childhood growing up in the wilderness of Wisconsin. I thought four treehouses, a lake within biking distance, and wild-spirited friends were the norm, and have continued seeking the same ever since. 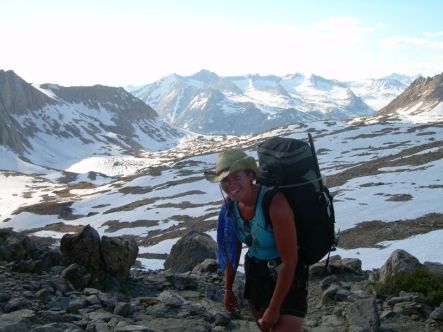 College brought art, design, and multimedia classes along with creative writing, literature, and science courses…following my curiosity was the name of the game.

So it seemed to make perfect sense to join the Peace Corps after my liberal arts degree. I found myself living in Burkina Faso, West Africa from 1999-2001, and managed to make it through to the other side of my two-year experience intact. Well, almost. I found myself in a military coup in Ivory Coast over the holidays, battled to eradicate guinea worm from the 15 villages I was assigned to, and formed a theater troupe of young folks from my village of Zogore to hold performances about AIDS education.

Many many cases of giardia later, I left Africa for the seduction of my first long-distance hike: The Appalachian Trail.

The challenges really weren’t that different from the Peace Corps. I was comfortable being dirty, didn’t mind the lack of electricity or running water, and I constantly thought of food I would eat if I had a chance.

I fell in love with walking every day, all day, for five months. This was what I was meant to do. That, and figure out that whole career thing.

So I moved to Washington D.C., started interning as an exhibition design intern at the Smithsonian, and found myself at one point with a power drill in one hand, a priceless Lichtenstein in the other. Even I surprised myself when my hand didn’t slip as I was unframing the painting.

What next? More learning.

I attended Goldsmiths College in London to study how design can make the world a better place. My small class was filled with students from around the world who were interested in designing a healthier society for all of us. I chose to look at museum exhibition design through that lens and theorized that we need to take the museum out of the museums…that’s a long story for another day… there were jobs in this kind of thing, right?

Reinventing myself take 23.7: moved to Portland, Oregon, and worked as a graphic designer until I could get myself on the next trail: The Pacific Crest Trail in 2006.

A solo hike in a high snow year? Bring it on! In fact, I wasn’t solo all that much. I met amazing people and felt incredibly strong through what will remain one of the most joyful experiences of my life. If I wasn’t addicted to living out of a bag for months at a time and sleeping on dirt before, now I was.

So let’s try out this whole “making a living by working outdoors” thing. It worked for a good five years too. I started by leading hiking and cross-country ski and snowshoe tours out of Portland; moved to Durango, Colorado to lead backcountry trail crews; taught a lightweight backpacking class at Portland Community College; became a field staff for two years at a wilderness therapy company in Bend, Oregon; and then did a season of logistics for Outward Bound Odin Falls.

Those were good years, and I ended hiking more trails like the Northville Placid Trail, Colorado Trail, and Arizona Trail, but I desired a home and decided to leave the illustrious position where I was barely able to pay off my student loans for an incredible opportunity with a publishing company in Bend, Oregon. I dove into the Bend arts community as editor of our local arts magazine, integrated with the business community as a writer for the business paper in town, and help launch a new arts coalition in Central Oregon.

Even while not working specifically in the outdoors during this stint in time, I needed to scratch that creative and hiking itch so founded the brand Hikertrash with fellow pal Brian Frankle (we sold the company a few years later). What started with a screenprinting project in my boyfriend’s garage turned into a business that donated a bit from our sales back to trail organizations and made hats, shirts, and other fun things to dress our favorite hikertrash pals on the trails.

During this time I also wanted to transition back into the outdoor industry and joined a coalition of Bend outdoor companies to help establish the nonprofit Oregon Outdoor Alliance and started engaging with outdoor companies as a hiking ambassador.

In 2015 the unknown beckoned once again, so I set foot on the Continental Divide Trail (CDT) for a solo thru-hike of the trans-continental trail. I worked with the Continental Divide Trail Coalition as their first trail ambassador that year, and was taken under the wing of CDTC Executive Director Teresa Martinez who gave me a glimpse into the world of what it takes to create and manage something like a 3,000-mile trail. 160 days and 2,708 miles later I reached Canada and completed my Triple Crown.

Returning to Bend after hitting over 10,000 miles hiked was an intimidating prospect. What could I possibly do to top completing the CDT and triple crown? As I struggled for traction in the absence of the next big goal, an answer appeared: establish the newish 750-mile Oregon Desert Trail.

I jumped on the chance to work for the Oregon Natural Desert Association (ONDA) to help figure out…now what? ONDA had created a “virtual route” and needed to figure out the next steps to make this a viable, doable adventure in the deserts of eastern Oregon.

I just happened to have a million past experiences that helped me figure this out. Community development? Peace Corps, check. Trail maintenance? Southwest Conservation Corps, check. Hiking routes? CDT, check. Managing a long-distance trail? CDT Trail Ambassador, check. And while I knew this job was perfect for me, it was when I realized that the Oregon Desert Trail was my museum exhibit, that the prospect really clicked.

I now see my role as facilitating a person’s experience through eastern Oregon through the resources I create and the connection I hope to inspire in those spending a day, to a week, to a few months out there on the route. I want them to leave the 750-miles having learned something about eastern Oregon, having learned that we, as hikers, have a role to play in the health and future of the public lands that make trails possible and having learned that we are all a part of nature, not separate from it.

My previous thru-hikes include: