​It rained off and on all night, and then the wind changed direction. I had been deliberately tucked in the sagebrush and behind a slight rise in the terrain to block the wind. Then it changed, and although it blew away the clouds I was left with the flap flapping of my tarp the rest of the night.

It was a quick climb up to the rim, and, wow. Wowowowow.

I would be walking the whole rim and beyond today. What a view!

My poor words can’t describe how amazing the walk was.

I made some friends along the way.

By early afternoon I was off the rim and looking back at where I had come.

But I still walked, and by the end of the day could barely see the top of the peak I had climbed. Just incredible.

Late afternoon I left the ODT route for another alternate of my own creation, this time to walk in and out of Christmas Valley. I will get there tomorrow to resupply, eat a meal or two, and have a stay at the Desert Inn Motel. 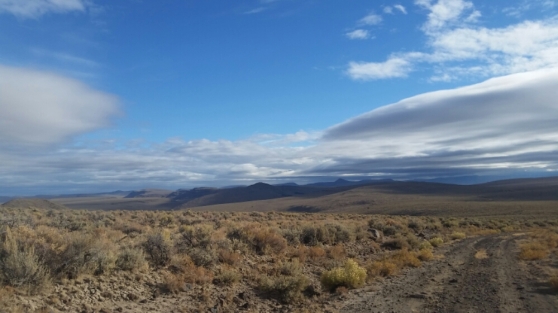 I had dropped some water in an awkward spot since I didn’t make it all the way in to where I had wanted on my caching run 2 weeks ago, so ended up walking there instead of the route I had scoped out on Google earth. No matter, it will work as well!

I INHALED my mac and cheese with added tuna packet and am hoping the sky will cooperate so I can cowboy camp tonight.

My legs and feet are feeling the half day of cross country in rugged terrain. Ouch.