Ok starting this day out right with some Beasty Boys, if that’s doesn’t get me going, I don’t know what will!

While my walking started in the forest again: a uniform smattering of young trees (former burn area or logged?), I would enter the land of rock soon. But first I met another southbounder, Patrick. They keep coming! It’s so late in the season for me to still be meeting southbounders, they will be sure to have an interesting time of it in the high country of Colorado.

Then I was climbing up shale talus to a few peaks and to meet the Divide. Mountains! I could see a horizon line again, and there were mountains! The smoke was still lingering in the air, but much of it had dissapaited, and it was wonderful to see my surroundings once again.

There were dramatic cliffs and ridgelines all over the place. For most of the morning I wound in and around these rocky outcroppings, and met a few more hikers: Three Trees who was sectioning the CDT, and Voyager, a very seasoned hiker who’s CDT blog I had been reading last year. He hiked north to the Winds, and this year was hiking south to his finish spot last year…which would make his second thru-hike of the CDT. Cool guy. 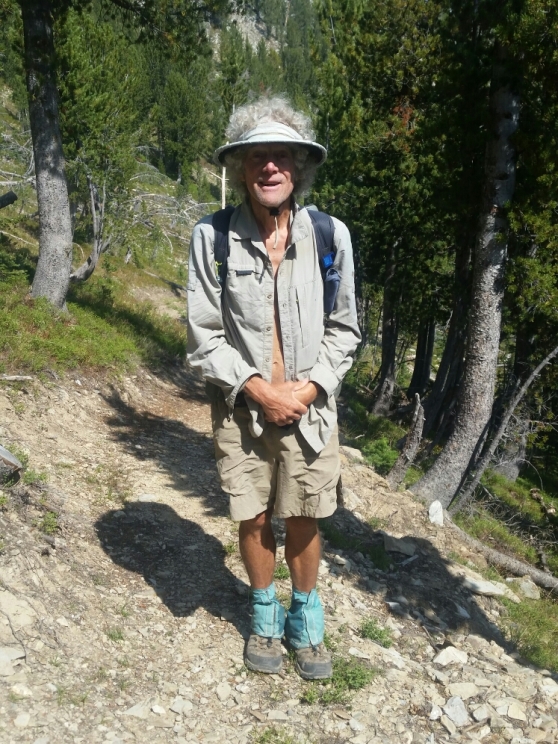 The afternoon was spent back in the trees and at lower elevations, Three Trees said he was dissapointed to have to leave the Divide and walk these lower miles, but I really don’t mind that much, it gives much more water, and I like the diversity.

I saw some clouds building as I was about to make camp, so pitched my tarp for the first time in a long time (I’ve really enjoyed sleeping out this past week), but now, a few hours later, the clouds are gone and it looks to be another clear night. This section has been nice and dry, which is a huge change from the rest of the trail, and I’m really enjoying it!