It was a dew-riffic night, and even though I had some trees over head for protection, I woke with a wet tarp inside and out. Luckily the forecast was clear so I knew I would be able to dry out on breaks.

I thought when I had reached the Idaho border last night that I had also reached the border of Yellowstone, but when I arrived at the Yellowstone border a few miles into the day I realized my error, oops, I guess I shouldn’t have camped where I did!

The trail joined an old road, and for the rest of the day I had easy walking. For some reason to block off sections of this road big berms had been bulldozed in, and you would think one or two berms would do the trick to deter whoever they were trying to deter, but no, it went on for miles. 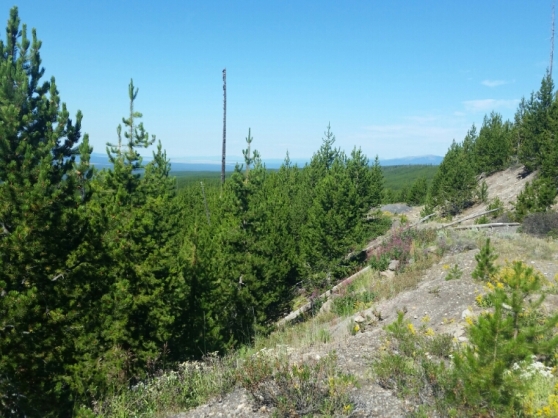 When I took lunch I had reception, so was able to finish canceling and re-ordering my debit and credit cards. I decided to have them sent to seperate towns incase problems occured, as it was one of my cards could be fedexed general delivery to my next post office, even though fedex doesn’t deliver to post offices…when I called the post office to confirm, they agreed that they didn’t accept fedex, even though the card company assured me they could…and it had already gone out, so we’ll see what happens!

Saw another moose cross the road!

I called the Leadore Inn, where I sent another card, and let them know my situation, and if I got the card I would be happy to stay there, and Sam said even if it didn’t arrive he would let me stay and I could just owe him, dude! how nice!!!!

So I met a bunch of southbounders and flip floppers today, and the greatest reunion coming from Funsize, another Bend hiker! I hadn’t seen him the whole time on trail and it was great to catch up and hear that Delightful, the other and last of the Bend hikers still on trail, was just up ahead at the campground at Sawtell, awesome!

I kept on trucking, got a hotdog, cheetos, and rootbeer at Macks Inn, a small resort community, and walked the 2 miles further to Sawtell where Delightful was camped with G and Funk.

I rolled up and dried out my stuff, and caught up with Delightful whom I hadn’t seen since Chama, NM. We ate a bunch of food, went on a beer run, and then the 4 of us went to play horseshoes with (forgot his name!!) a section hiker who was also staying at the campground. G and I killed it, and now I’m retiring in my tarp, not far from a busy highway. Why oh why do they put the campgrounds right next to busy highways??? I understand the convenience, but who can camp with this noise?????