(So I need to update my next mail drop to Butte…a more realistic arrival date since I just took a week off is 8/30, and Lincoln is 9/7…but even if boxes are already out they should hold them for me!)

It was a slow start this morning. Whenever I hike with someone new it’s always interesting to see how our styles differ, and since we were all in an established campground with a Subway nearby, the morning was slow and included a stop for some footlong subs for breakfast/lunch.

We began with a 10 mile road walk up up up near Sawtell Peak, plenty of ATVs and dumptrucks passed us, kicking up dirt and causing us to dodge the clouds. We never did figure out where all the dirt in those trucks was going, but there must have been a major dig of some sort up there.

After polishing off our subs, we finished the climb and found our trail, but it quickly petered out and we began a few miles of bushwack. Delightful and I found faint tread most of the way. We happened upon two moose; one was a big bull moose, the biggest I’ve seen yet! We walked up and around the big guy to give him a wide safe zone, and soon found ourselves deep in a swampy willowy section where our options were to either swim, or push our way through the willows to dry ground. 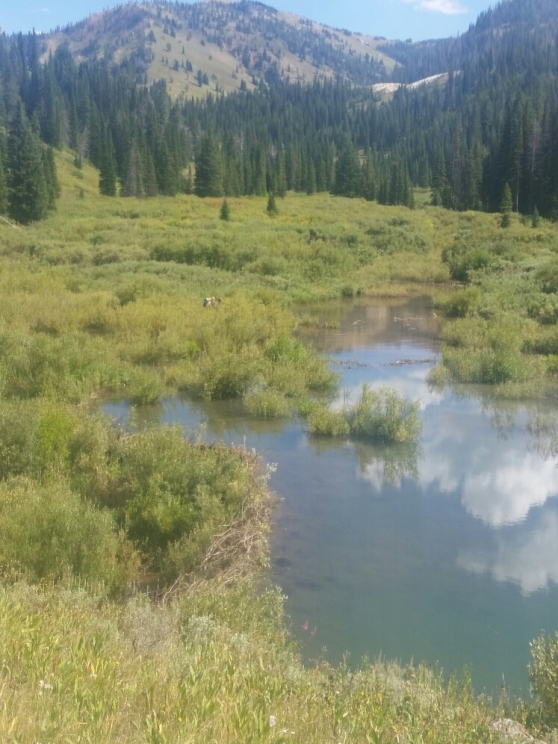 We all reconvened near Lillian Lake and started back on some really nice tread. The Idaho mountains were rocky and quite beautiful in the late afternoon sun. A quick squall had us scrambling for rain layers, but it was over as soon as it began and we made camp on a ridge where I can faintly make out the Tetons in the distance.