Bearclaw and I woke to frost on everything, our shoes were frozen, the laces set in the very same condition they were in when we took them off and tossed them aside last night. Luckily because I have my Chacos too, I didn’t have to force those things on!

Our first few miles were across the beautiful open expanse of Airplane Mesa. So different from the day before in the canyon…now we were crossing vast grass lands with trees picturiquesly peppered throughout. 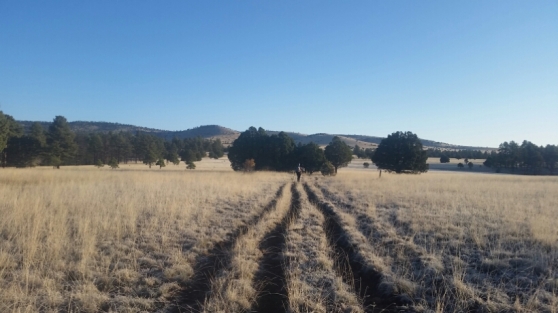 We made fast miles that morning, and the pace continued as we found ourselves on dirt roads for most of the day. A brief cross country section in T Bar canyon broke up the two-track theme, but the constant was wide open spaces and sparce trees until lunch time when we got to a wooded section and met up with Axyl and Race who were having lunch.

We threw down our packs, unpacked all the gear to dry out the damp things from the morning, and caught up with the two men. Race’s ankle had been troubling him greatly and we were concerned for him.

We all four headed down the road into the forest and as luck would have it, in the later afternoon a forest service worker came by and Race took the chance to get a ride into Reserve to get his ankle looked at. We got a bit of trail magic in the form of a few liters of water, and continued on. 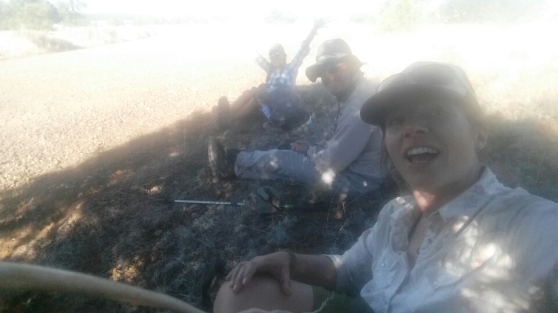 Break on the side of a road

The road is BEATING our feet up. The fast pace, and miles, and pounding of the hard surface was taking a toll on the three of us, and after a short break before yet another road section, we decided one more hour of walking and then camp!

This is my longest day on the trail so far…a bit farther than a marathon…and we may try to continue the pace to make it into Pie Town by the weekend. Pie! Town! Showers and laundry and food and mail…and phone service. I haven’t had phone service in about a week, and it has been over a week since my last shower. This is a long stretch after the realitively short span between Lordsburg and Silver City. It’s a big mile stone mentally…we are well on our way on this trail.

We are all three cowboy camping tonight and man, will closing my eyes feel good!