Summer is most certainly coming to an end in Oregon, and while the days are getting shorter, we are still inundated with smoke from more wildfires than I can count. Oregon is burning, so I’m heading south for an upcoming hike. Stay tuned for more details soon. Blogging will happen, photos will be taken, but I plan to give myself the gift of unplugging from the internets (or 4G) during the hike…posts will come after a short delay.

Even though I haven’t been able to stretch my legs on any long hikes this year, I have been immersed in the land of trail work.

Part of my job as the Oregon Desert Trail Coordinator this year was to lead some trail work trips. It’s so satisfying to maintain trails, especially when they are as overgrown and neglected as some of the ones along the ODT.

But I thought the ODT is a route, not a trail…

Yes, you would be correct, but of the 750 miles (actually current count is 753.5 miles), 11% is along existing trail. These are trails our federal agency partners haven’t been able to work on in many years due to a myriad of reasons, including lack of funding and use. This leads to a vicious cycle of hikers not hiking the trails because they aren’t maintained, and trails aren’t maintained because hikers aren’t hiking them…

SO, we are harnessing the incredible hard working volunteer manpower to make a dent in some of that maintenance (last year over 500 ONDA volunteers contributed almost 10,000 hours to a variety of stewardship projects including riparian restoration and animal monitoring activities, WOW!). A lot of my work last year involved establishing relationships with the four different BLM Districts and two different National Forests that manage land along the Oregon Desert Trail in eastern Oregon, and this year I worked with those partners to develop four trips.

I’m incredibly proud of my volunteers and the work we did. It had been a full 10 years since I led trail crews around Colorado for the Southwest Conservation Corps, but the memories came flooding back as I swung the Pulaski and built berms along the drain dips with my crews. Trailwork!

I will continue with the work in 2018…there is so much to do! Are you interested in joining me on one of the trips? Some are backpacking based, some are car-camping based. We were packed in by a BLM horse team on one trip, and might even provide some chain-saw training opportunities for another…lots to help with. The ONDA stewardship trips get announced in mid February each year, so I’ll keep you posted here on when those go live, I’d love to have you join me on a trip or two! 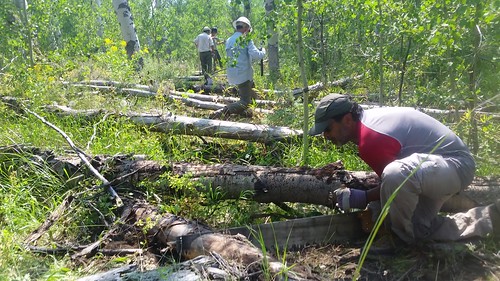 The opportunity to help build the trail I will hike has been a driving force for the past 8 years. After finishing the Pacific Crest Trail in 2006, I knew something in my life had to change. Up until that point I had been working as a graphic designer in Portland, but the desire to make hiking my career had been stewing for months as I hiked north.

I met other hikers who had devoted their careers to the outdoors, including NOLS instructors, outdoor educators, guides, fire fighters and even the serial backpackers who would work a job, any job, during the winter months just to save up enough money to be able to hike the next year.

This guy. Lint manages to hike almost every year.

I returned to Portland and began scouring the internet for outdoor jobs.

What I became immediately drawn to was a position with the Southwest Conservation Corps (SCC) out of Durango, Colorado. They had a trail crew leadership development program where I could not only learn how to build and maintain trails (what a chance to give back to the hiking community!) but also lead crews around the state to…wait for it…build the Continental Divide Trail! SCC had been contracted to build/maintain many parts of the CDT in New Mexico and Colorado and the opportunity seemed perfect. Help build the trail I will hike next. Done.

I arrived in Durango in February 2007 and quickly dove into the training: chainsaws, pick axes, and rock bars filled our training hours, and we worked everywhere from Mesa Verde and Canyon of the Ancients, to the Great Sand Dunes and backcountry trails in the San Juans. What didn’t materialize, however, was the Continental Divide Trail work. That year Congress kept the funding for things like trail work caught up in their bi-partisan bickering when they didn’t pass the budget. Bummer.

I had a great season though, My crew and I spent six weeks in a backcountry hitch building massive rock and log retaining walls. I worked with Zuni and Navajo youth from near-by reservations, and met some great friends that last today.

And log retaining walls, notching and sometimes cutting by hand

It was very satisfying and I have an incredible amount of respect for trail work now! This took about 4 weeks for 20 feet of trail

Now the Continental Divide Trail Coalition (CDTC) has taken matters into their own hands, and instead of just relying on the federal budget for their trail work dollars, has started a campaign to raise funds to build 32 more miles of trail in Colorado, and SCC will be one of their partners in the project. And they couldn’t hire a better organization.

Funding finally did come through for some CDT work in the Fall, but by that time I had already committed to thru-hiking the Colorado Trail. It would be a north-bound fall hike, when most hiked it south in the summer, but I found I missed most of the summer afternoon lightening storms and had amazing weather most of the hike. I did encounter one nasty storm when I got onto the divide near Stony Pass, but the next morning (after I surely thought I was going to die in an above-tree-line electrical storm) I found the SCC crew working on the CDT!

I love that crew, and not just cause they gave me candy.

I love that there will be trail built in a pristine area where I encountered dirt bikes and four-wheeled vehicles. Lets get some more trail built. You can donate here, and you can be assured the folks who build it will be some of the best out there. They love the wilderness and are probably former/future thru-hikers too!