Now that I’m home, I am learning more and more about the Gila River and efforts to protect it as a Wild and Scenic River. Read more here

Now, back to the river!

We didn’t make the miles yesterday that we wanted. We had over 40 miles to go on the trip, and there was the added wildcard of rain and potentially snow in the forecast soon. Our options were to paddle fast and get out before the weather, or slow down and keep on despite the weather. Because some of our crew didn’t have dry suits and were already somewhat cold and wet during the day, we had to consider the dangers of paddling all day in wet clothes and 40 degree temps. So far we had had blissful sun during the day which not only helped moral, but helped keep everyone warm.

So today’s goal would be to get an early start (earlier than noonish), and move down the river. We were on the water by 10:30 (success!!) and doing a bit more paddling all around.

The water levels have continued to drop, and with it the speed of the moving water. But we were making awesome time, and after the first hour in our boats, had already gone 5 miles. 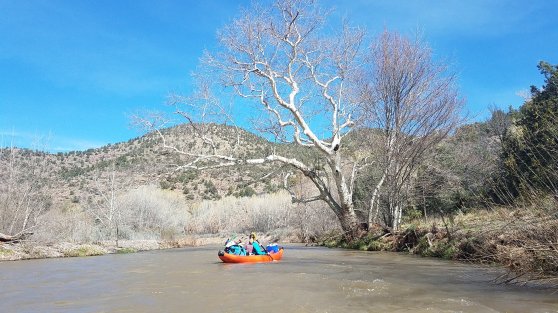 We continued on, and if it was possible for the river canyon to get even more beautiful, it did. We were paddling past more dramatic rock walls, and since we were dropping in elevation every day, the signs of spring seems to intensify over the miles. We also spied caves in the canyon, caves that might have housed people for thousands of years.

We are, as JJ calls it, epicing. 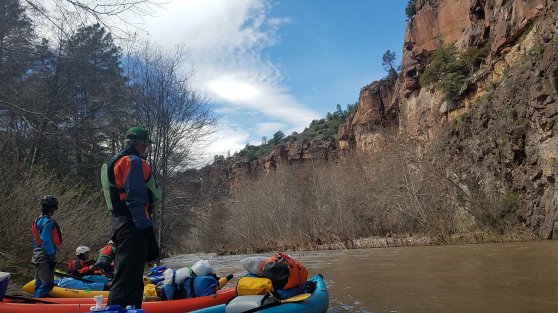 We had lunch on a rocky beach. Oh yeah! It was St. Patrick’s day! As a Patrick I felt it was my duty to pass around some whisky during the break, and we all practiced safe flasking by pouring it into our mouths from a safe distance.

We kept on moving down the river that afternoon, had one tree we needed to limbo (duck down to avoid smashing our face into it) but everyone made it through unscathed.

Mike’s turn at the limbo tree

By the time it started to cloud up, we found a nice big flat to make camp. The rain and cold were due to start the next day. I was carrying an InReach beacon, which offers a way to get a weather report. We checked it and saw the rain was due to start late morning tomorrow. So we did the only logical thing and decided to decide our next move in the morning. 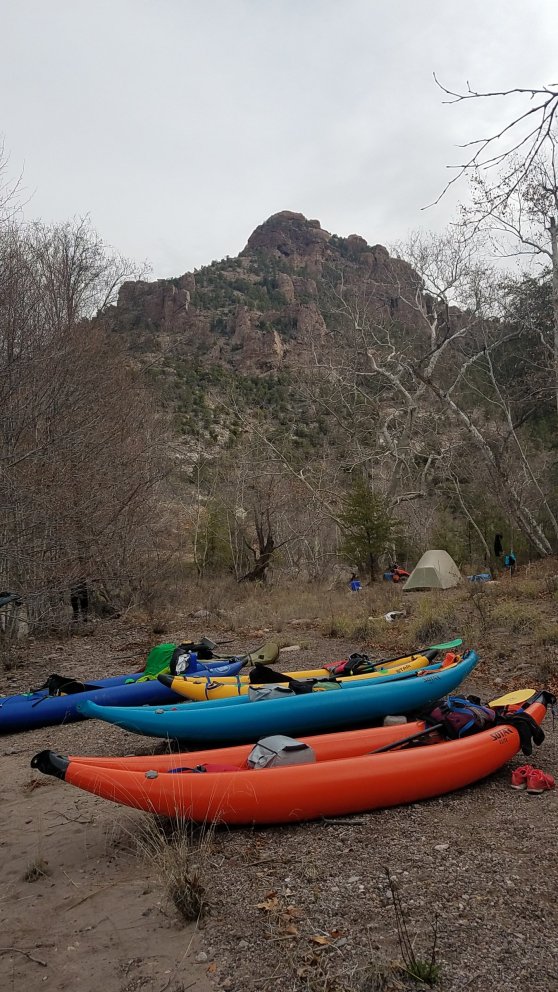 There was a fire to make, and some chillaxing to be done.

One thought on “Gila River Day 3”

Reason #67 why I wear a Purple Rain Skirt
Hot tip: shoes off tyvek naptime for maximum miles (or is that smiles?)
PCT day 1....PCT day 160ish
Happy birthday to my favorite human! You are the spring in my step, the twinkle in my eye, the icing on the cake, the breeze on a hot day....you make everything better! Love you NEMO!
You taught me to ski, paddle, and to embrace the luxury of NOT always sleeping on the ground...I'll glamp with you anywhere! Happy birthday weekend Kirk 😍
When your artwork becomes a tattoo 🥰🥳😄 love it @agk9adventures!!! I'm glad you got the poison ivy in there....the Blue Mountains Trail is well represented!
We spent years shit-talking paddleboards, then we got on one....🤔
Frog water at its best.
Here comes the sun