I was up at 5am for some last minute packing. Nemo was flying into the Portland Airport at 10am…a 3+ hour drive from home in Bend. We had been sending an increasing number of messages to the effect: “almost back together again!!!!” 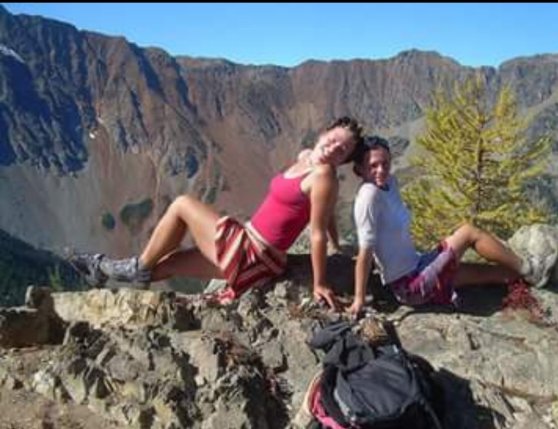 Nemo and I met while hiking the PCT 12 years ago, and we got along so fabulously that we hiked well over half of that trail together, and have continued to hike every few years: the Northville Placid Trail, a few hundred miles of the Arizona Trail, and many trips to her local mountains in NY’s Adirondacks. We had been planning a hike together for over a year…and the day was here!!

Originally we had talked about going back to the Wind River Range which had featured prominently in both of our CDT thru-hikes (Nemo is a triple crown hiker too), but then she came up with the idea to hike the Sunshine Coast Trail. It just so happened that her high-school friend lived in Powell River, a stop along the trail, in a very hard to reach spot on the watery and rugged British Columbia coast. So we looked into it more: 180 kilometers or 110 miles, several ferry rides and/or water taxi rides to the start, Canada’s longest hut to hut trail, and 22,000’ of elevation gain. What!?!?? It sounded AWESOME.

I ordered a guidebook and soon put together one of the most useful documents of any long trail: a data book. There was one of sorts in the back of the guidebook, but it was all in kilometers and I wanted miles for my feeble American brain.

Nemo worked on logistics, figuring out the ferries and things. It turned out we would be passing through Vancouver BC and right by the place of another friend of ours from the PCT: Peppie. Peppie had married another thru-hiker from 2006, Ben, and they now had 2 children. They had just moved to Vancouver from Seattle and were currently at her folk’s house in North Vancouver.

On my way over Mt Hood to Portland this morning I saw a woman hitching at Frog Lake where the PCT crosses the highway. I pulled over and offered her a ride to Government Camp, a resupply stop 15 miles down the road. “Where in the world is Carmen Sandiego” (or Carmen for short… that’s one of the longer trail names I’ve heard of) was thru-hiking and in fact had tried to hike the Sunshine Coast Trail in the past! She was from Ontario, Canada and had to get off when she stepped on a hornets nest and was badly stung. I shivered when she told me… I was very allergic to wasps. Regardless I thought it was a good sign as most people I had been talking to about the trail had never heard of it.

I made it to the Portland Airport just as her flight was arriving, and we jumped in the car for a LONG day of driving. I5 through Seattle was stop and go traffic even though it was the middle of the day. The drive took longer than we expected, and we made it through the border crossing about 5pm. The border agent asked us how we knew each other, and I thought: “do you want the long version or the short version?” We gave him just the bare minimum and passed through with flying colors. We got to Peppie’s folks place just as dinner was ready and proceeded to spend the evening drinking good wine and catching up under the Vancouver skyline (it was an amazing house with an incredible view).