Repost from Adventures with Packraft 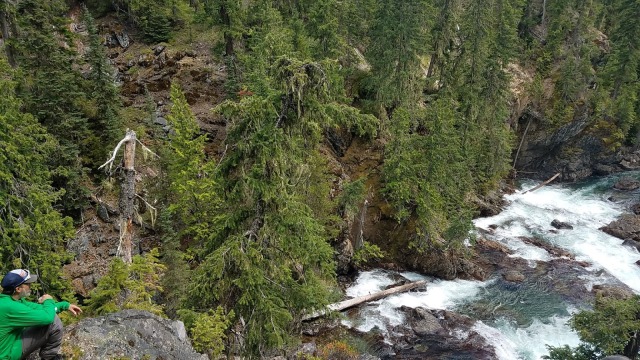 Kirk and I had the first week of July slated for a week of vacation, and we still hadn’t decided on where to go until the day before we left.I figured: draw a 10-hour driving circle around Bend (I didn’t want to drive farther than that), but turns out that includes the whole Pacific Northwest. Not much help.

We looked at packrafting the Bruneau and Jarbidge rivers in SW Idaho, but at low flows the rocks are reported to be tearrrrifying…tear…if..ying…tear. No thanks.

We thought about the Olympics, but we would be looking at a 4,000’ climb to get up the good alpine stuff, and we weren’t feeling THAT ambitious.

We thought about rafting the lower main Salmon River, but it is a very popular stretch, and open to jet boats… With July 4th happening during our week off, we knew it would be one of the busiest vacation weeks of the summer.

So, when Kirk came up with a combo backpacking and packrafting trip in the Alpine Lakes Wilderness in Washington, it sounded perfect. I had hiked through the Alpine Lakes area 12 years ago on the Pacific Crest Trail, but that September the whole stretch was drenched in rain and fog and I really didn’t see much. I was excited to go back and hike a little bit on the trail, check out some high alpine lakes, and do some packrafting.

It was hard to decide where to go even then. The area is massive and so full of mountains, rivers, lakes and trails that it really makes Central Oregon and our Cascade range look like child’s play.

We let the rivers decide where we would go.

We drove to Cooper Lake on Friday and camped on the side of the road (Washington has so many free roadside campsites!). Kirk has been checking out the Cooper River, a short, stout whitewater run, that was over my head, so next we drove up the Cle Elum River. It looked promising, then we hiked in to the river Kirk really wanted to check out, the Waptus.

We were worried it wouldn’t have enough water, but when we got to the confluence, it looked doable. It would be a mellow river with a few gorges…unknown gorges involving extensive scouting… so it would be a real adventure!

We left the parking lot with a week’s worth of food, boats, backpacking gear, and if we had weighed our packs I bet we were both tipping 60-70 pounds. It was painful. So painful that I wasn’t sure my body could do it, and I have rarely felt that! We were to hike in 9 miles with the full load. Eeeeeee! 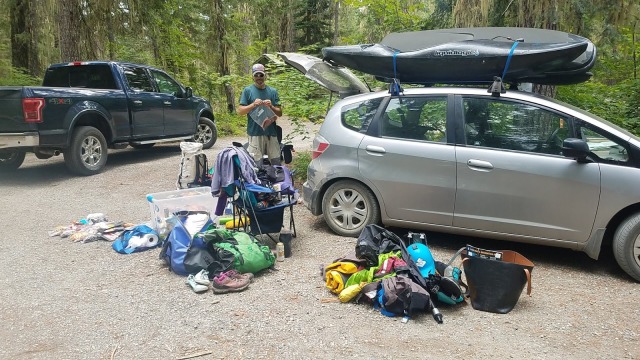 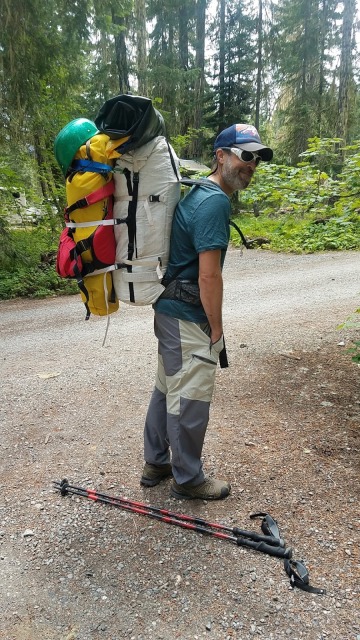 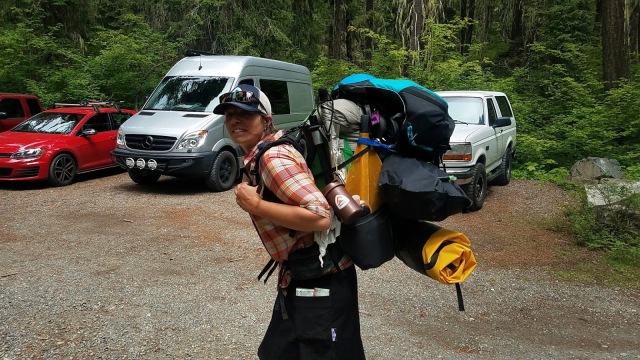 We made camp the first night about 4 miles in at the top of one of the gorges with what looked like a fun granite slide and drop. We had already passed a waterfall with a series of no-go drops, so we already knew the river would hold more surprises, and we would have to portage some stuff. 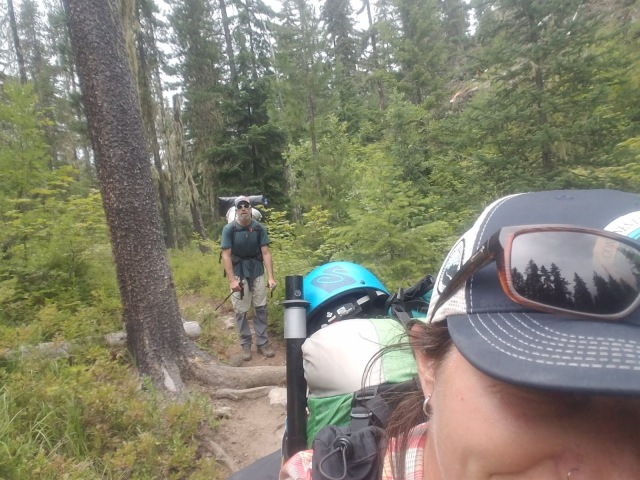 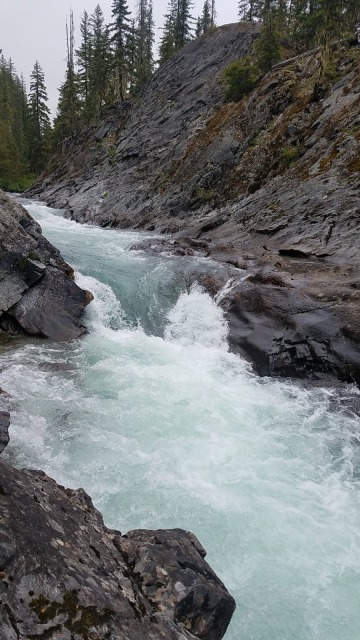 We huffed and puffed our way to Waptus Lake (on the PCT) and cached our boats. 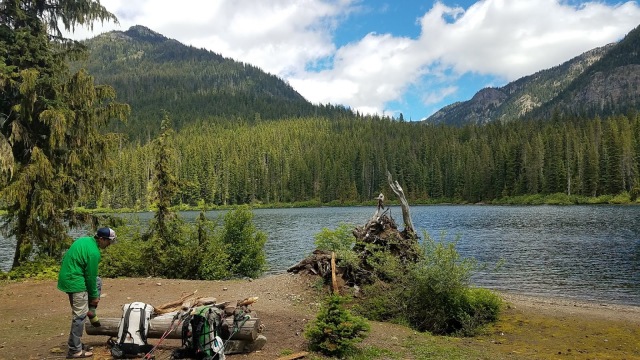 We spent the next few days hiking to some incredible lakes including Spade lake (holy cow, the trail goes straight up and reminded me of the Appalachian Trail…no switchbacks up the 2,000’ climb. Brutal.) 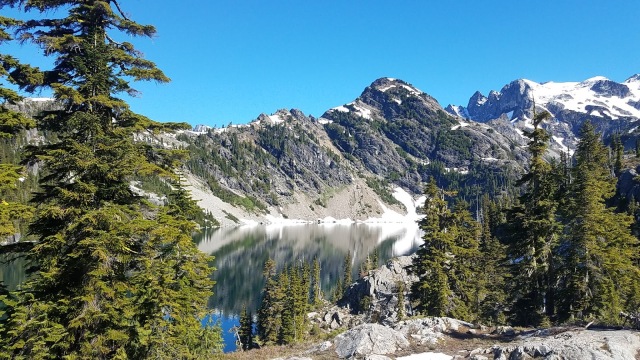 Then we went up to Deep Lake. 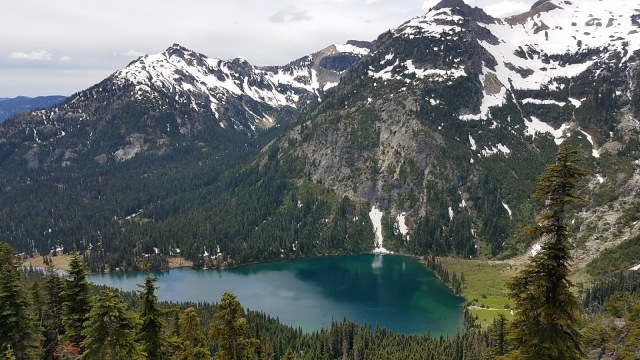 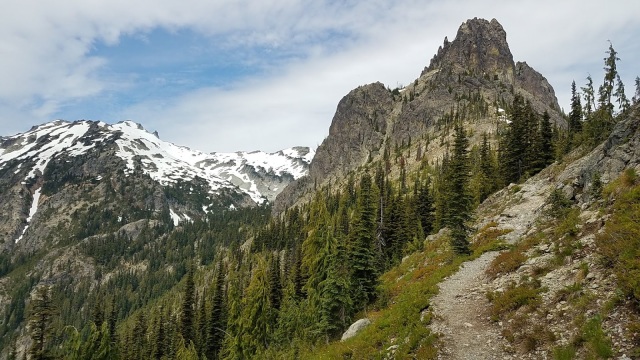 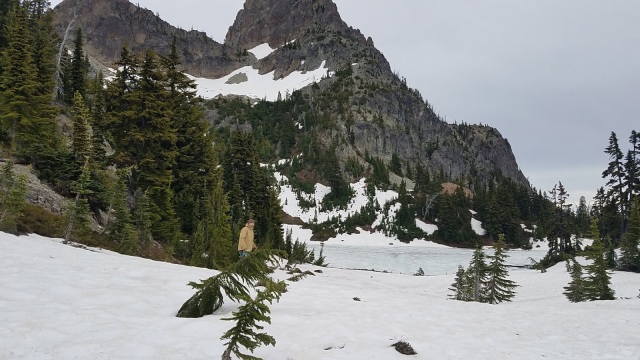 This was on the PCT but I didn’t remember any of it.

Peggy’s pond was still under snow but we found a dry patch under the towering Mt. Daniel for an incredible view. I must say, PCT hikers don’t know how good they have it. The minute the trail intersects a path that doesn’t continue to Mexico and Canada, the character changes immediately…no switchbacks, quick elevation changes, scree. But on the other hand it is efficient. 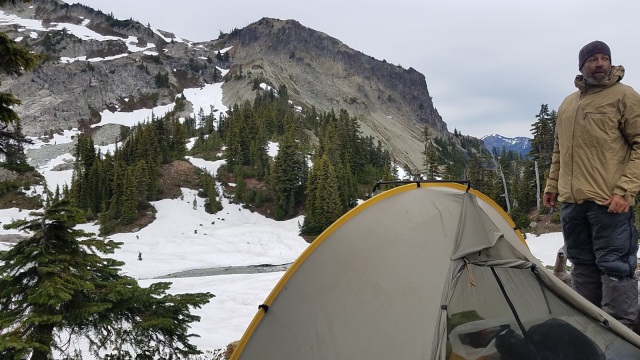 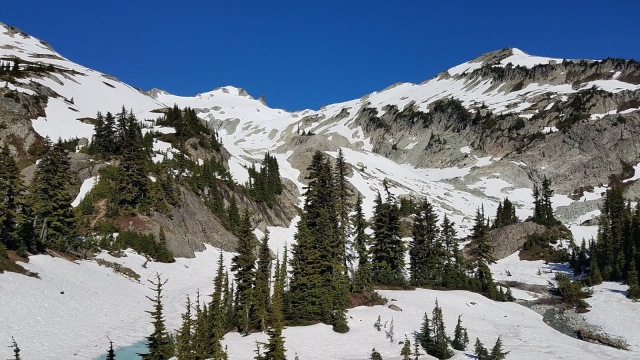 We made our way back to Waptus Lake and our boats on a hot sunny afternoon, so I had to dive into the lake. COLD. Yes the lake is fed by snowmelt, and yes it was unbearably refreshing. We inflated our boats and paddled around a bit and enjoyed the bliss after some pretty challenging backpacking. 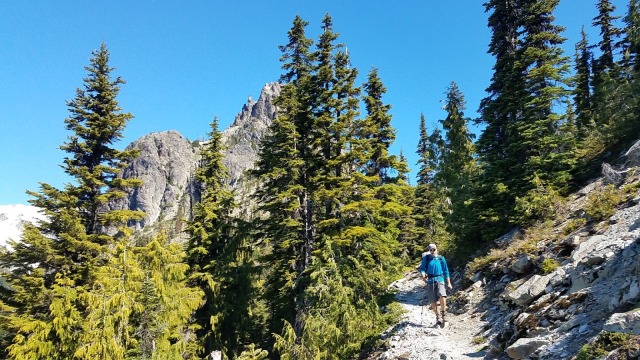 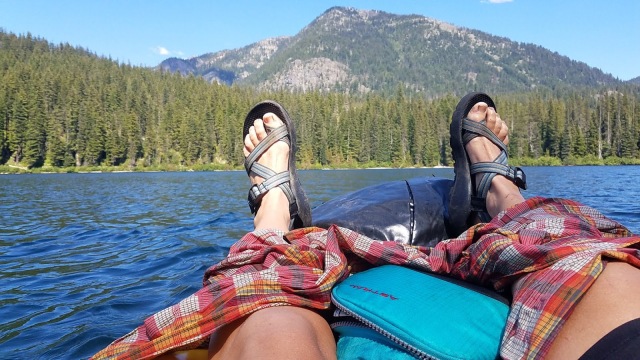 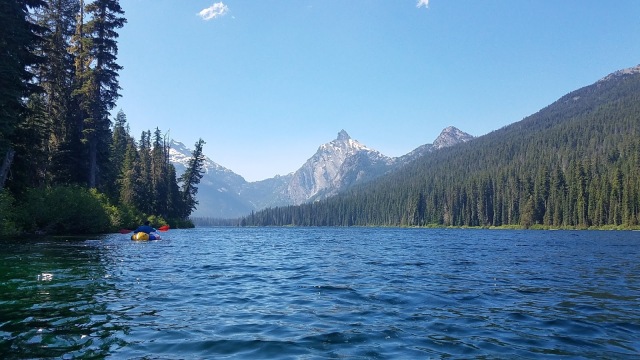 The next morning we loaded up the boats to see what Waptus River had to offer. 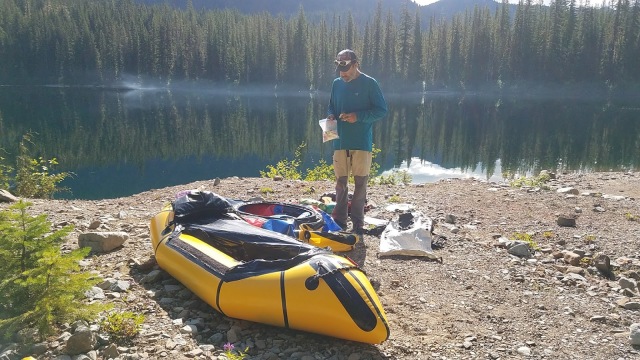 The calm and pleasant paddle out of the lake lasted about a mile before the first gorge. 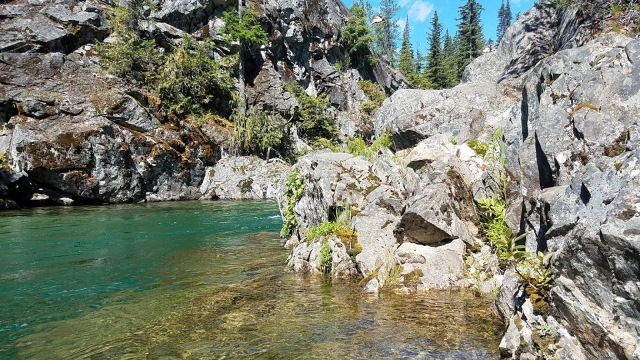 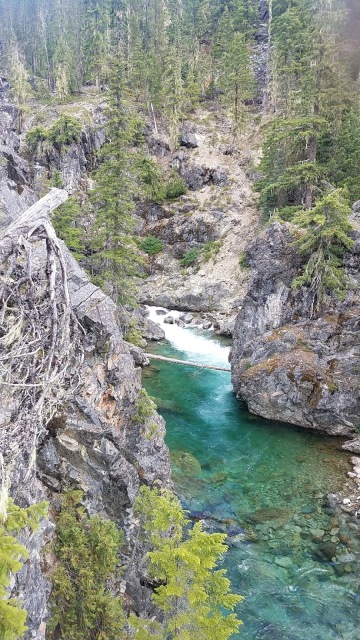 We got out river left to scout, and could tell the entrance was clean, but we didn’t climb the next bluff to see deeper into the canyon. It’s crucial to scout these places because they are so committing. Once in a granite gorge like this, there is no out. Often sheer cliffs prevent portages or walking around rapid, and narrow canyon walls can easily trap logs and make deadly barriers. So, since we couldn’t see farther in, we decided to do the smart thing and walk around.

The portage on river right looked more doable, so we picked up our fully loaded boats and walked around.

On top on the river right side we dropped boats to get a better look at the rest of the gorge, and to our dismay saw it was a go. The gorge was clean and runnable, but we were already mostly around and wouldn’t go back. Bummer, but we should have either taken the time to scout the whole thing, or be happy we made a smart choice with the unknowns we were facing.

The next 4ish miles were a braided river channel complete with several knarly log jams and gorgeous deep aquamarine pools. 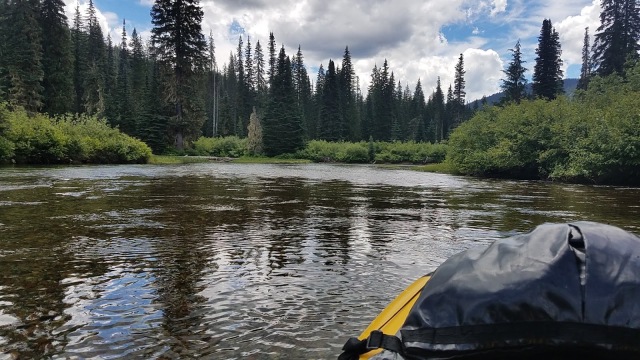 We huffed and puffed over the log jams and had several clear miles before the next gorge.

First we ran the granite slide and drop that we had scouted on the hike in. Fun! 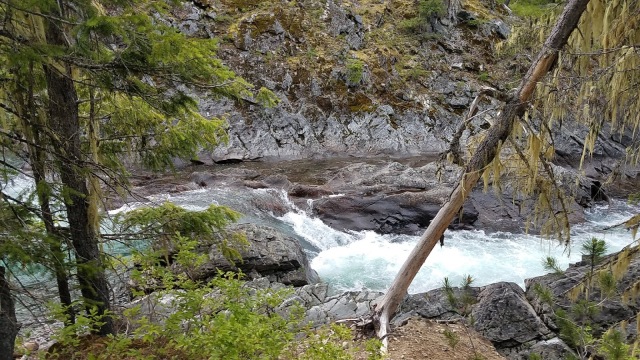 We pulled over and had lunch, and decided to scout the next gorge, the whole gorge, this time. It looked to be about a mile long, so we left our boats and bushwhacked up and down the steep cliffs.

We were able look down the steep wooded slopes for most of it, and it was clean. No logs blocking the way, but a few of the rapids were in the Class IV/-V range with no portage  / scouting potential, and I didn’t feel comfortable running them. 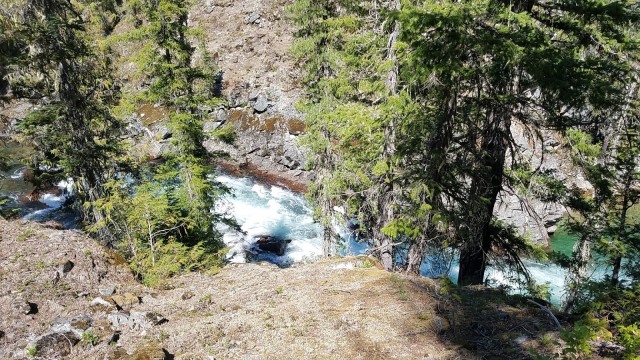 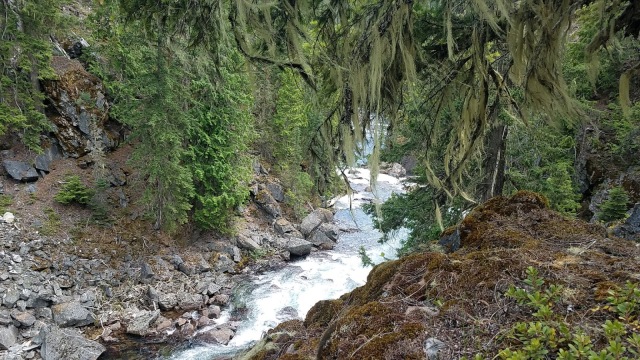 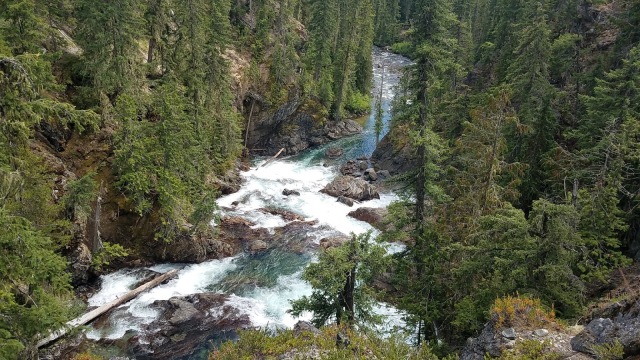 Kirk wouldn’t boat it alone (any Class V packrafters out there that don’t mind some brutal backcountry wilderness river trips? Kirk could use a big water adventure partner). Anyway the whole gorge ended with a series of waterfall drops (35′ triple drop) that looked good if you had a hardshell (not so good for a packraft), but no way to set safety on the second crux drop of the triple drop .

So we walked back to our boats while dodging a quick thunder storm, and picked up our boats to  make the whole journey back again.

We made camp with a view. 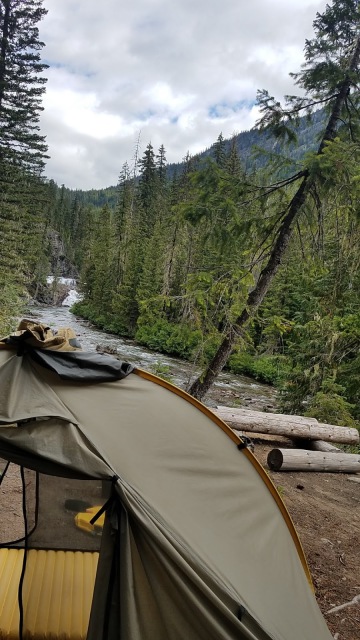 For our last day of paddling it appeared from the topo lines on the map that we might have another gorged section on our hands, but after launching that morning and padding for a short while, we realized the terrain wasn’t as narrowing as it looked, and it was all a go. 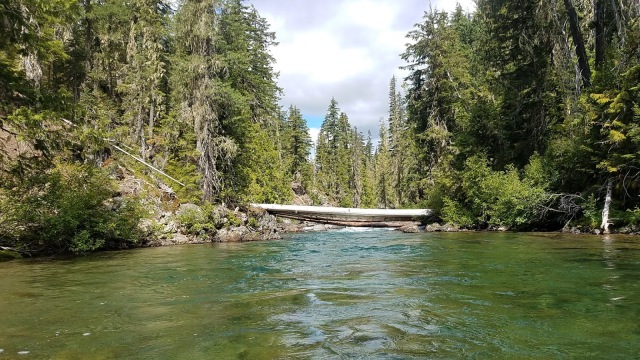 We were in some fun Class II/III water!

Beautiful pools of water peppered with fun rapids marked most of the run that morning. Towards the end of the run the drops started to get bigger, in the Class III+ range, but all were clean and good splashy fun. 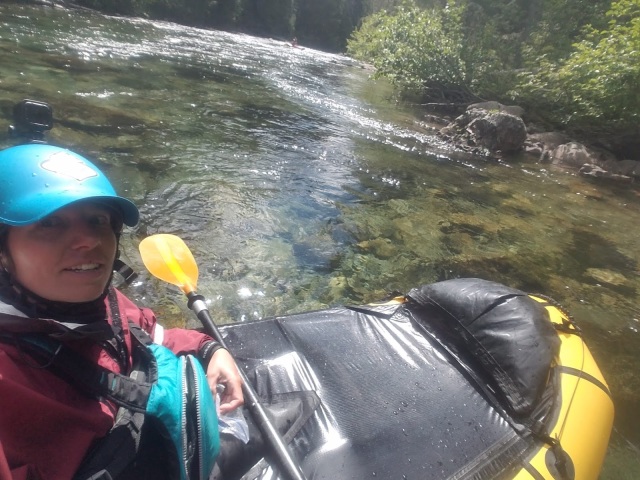 I wore my gopro for the boating, so got a lot of footage of the river, stay tuned for a video!

2 thoughts on “July in the Mountains – Waptus River”