(The CDTC needs your help! See this link for more info…thanks Wired for setting this page up!
http://www.walkingwithwired.com/2015/09/weve-got-to-help-cdt.html?m=1)

I set my alarm last night in hopes of getting up early and hiking the 26 miles to McDonald Pass early enough to get into Helena at a decent time…this is the first time I’ve woken up to an alarm in a long, long time. The days are getting shorter and the sun rising later and later each day…where once a 5am wakeup would find me at daybreak, now translates to a 6:30ish start. 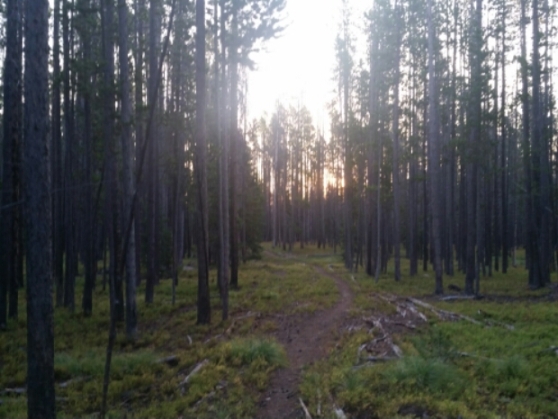 I walked into the early morning and soon came upon another tent…Medicare (Mary??? again, so bad at remembering trail names) a 74 year old section hiker out to do a big chunk of the CDT, having already hiked NM, CO & WY…no excuses people! If 74 year-old Mary can do it, you can do it!

I hiked in the glow of the early morning and took just a few breaks, fueled by my desire to make it to the highway in decent time.

A lot of the late morning and early afternoon were along dirt roads. I passed a bunch of new housing developments, while the developments were nestled deep in the surrounding wilderness, with all the recent fires I knew such places were ripe for destruction the minute something in the area gets struck by lightning. I would love to live in such a place, but the vulnerability seems so great…

I was back in the trees and on the trail this afternoon, and felt tired. My feet ached and my body was slowly dragged through the trees by those puffy feet. Tired.

I made it to the highway before 4pm and made myself a sign in hopes it would help my chances of getting to town. (Signs seem to always help)

I was picked up my a lifetime local and even though it was out of his way, he dropped me off downtown. I was going to stay with Shaggy, a PCT friend from 2006, and knew he lived near downtown, but first, I saw a brewery, and what do you know, a hiker in front! I went over and found 5 thru hikers inside, having arrived just before I did. I shared a pint and walked over to Shaggy’s place where he was preparing the grill for a brat and salmon dinner…YUM!

We reminisced over trail tails, and talked a lot about the changes on the CDT. He had hiked in 2007 with a bunch of 2006 PCT friends, and it was awesome to tell stories and reconnect.

Shaggy and his wife Lauren hiked the PCT together in 2012, and we had lots of stories to tell. I love thru-hikers!!!!