So smokey. The smattering of lightening we got yesterday had me a bit on edge as I walked, would I walk into a new fire? The smoke was so thick my imagination ran away from me during the morning, but eventually I had to stop thinking about it and just walk. I do have to say it’s hard to have that easy joyful feeling in the mountains when there is so much smoke and you are worried about not getting caught in an inferno.

Those worries didn’t take away from the brilliant view of Goat Flats though, I hugged a steep wall as I walked a narrow trail cut into the mountain, hearing elk bugles below for the first time. Dropping into Storm Lake, the smoke seemed to get thicker, but no flames, just my imagination running away with me. 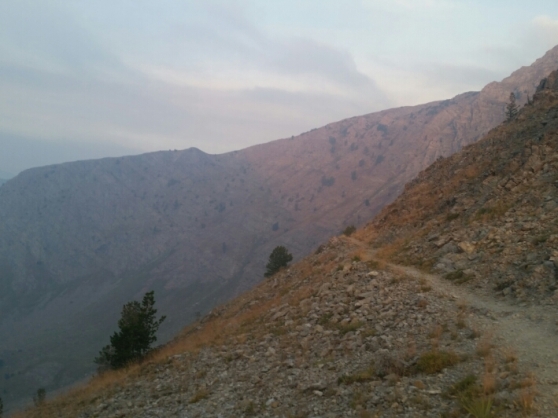 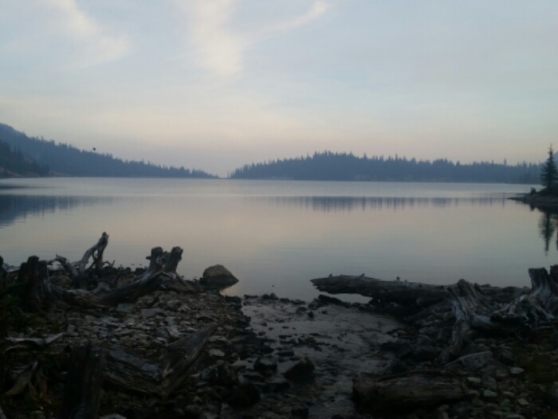 By the time I had hiked to another set of lakes, Twin Lakes, I actually got service on my phone and immediately looked up the fire incident map to see about any new fires. Alas, nothing was close despite the thick smoke. Phew.

I soon joined an old road and walked quickly through more old burns and the foothills of the Divide. I would spend the afternoon walking along hwy 1 into Anaconda…it was fairly busy, but a scenic walk, and I didn’t mind the pavement miles all too much. I had planned to stay in the campground in town, but upon arriving I lost my willpower to my fatigue and dirt covered body, and ended up checking in to the Celtic Inn, a few rooms above an irish pub. Great decision! It was cheap, simple, and clean, and I met some truly interesting and generous people in the pub below. I learned all about Anaconda’s status as a superfund site due to the giant smelter which processed the tons of copper pulled from Butte’s nearby open pit mine; I met a women called to come to town from the east coast to practice Reiki and help heal the town the best she could; I met kind, funny, and generous folks who all thought I was a little bit crazy…

I retired early, a real bed! It was a relief to be out of the smoke for the night.