I cowboy camped again, how marvelous! I love being able to look at the night sky if i wake up in the middle of the night, and since I was in a river canyon didn’t see what most Coloradans would have a unique opportunity to witness: the northern lights! I’m not sure how long the solar flare will make them visible here, but I will do my best to look out for them this week…if it doesn’t rain too much at night.

I was up and walking at about 6am…Copper Mountain was within reach and I debated with myself if I was going to stop in for a second breakfast. I’d be making it to Breckenridge today to meet Teresa, did I really need to stop at Copper too? Well, when I made it down the ski lifts and saw how close the buildings were of course I had to go down. I found an open coffee shop and had a breakfast sandwich and cinnamon roll to go with my second cup of coffee for the day. Just what I would need to help fuel the big climb out of there. 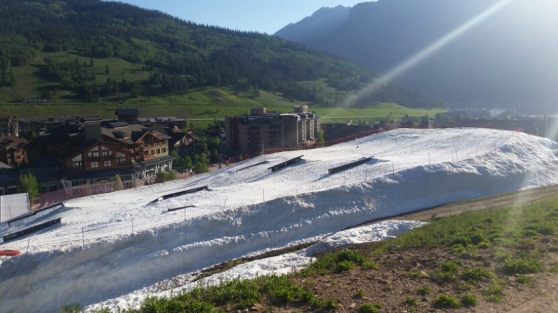 Now there is a major route choice here at Copper. The official CDT goes over the 10th Mountain Range and down into the valley with Breck before going up again for a bunch of ridgewalking at 13,000′ and up and climbs the 14er Grays peak. Its a bit longer and could still have considerable snow in places. The Silverthorne alternate is a bit shorter, has a few passes over 12,000′, but is generally the choice to make in higher snow levels. Most hikers that I’ve heard of having been taking the Silverthorne, but after talking to Teresa, I thought I would try the Grays-Torres route. Why not? There were a few places I could go low if I needed to, so I thought I would go for it. Go big or go home!

The climb up out of Copper was a long one, but upon reaching the ridge and having almost no snow I was a bit frightened to see the huge cornice hanging over the north side of the ridgetop. There was one set of footprints that I could see and they had gone up and over one spot on the cornice where it wasn’t hanging per say…it was about a 10′ drop and then side slope to a bit of dry ground about 30′ away. Yikes. I went to look at it, retreated, went out, tried to start, retreated, again and again, and finally put away one of my poles so I could have one hand free, used the other pole which had lost its snow basket as an ice axe of sorts (I could dig it in to self arrest if I needed to) and turned around to kick steps in backward as I inched my way down the cornice. 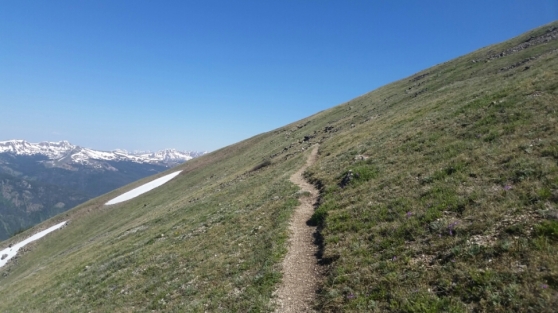 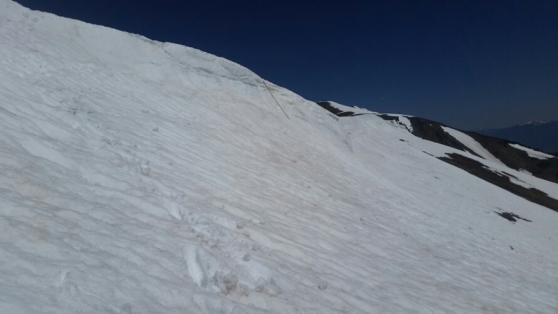 And I made it! Whew! On dry ground, going the opposite way the trail travels down the mountain, I had to reevaluate how I was going to get out of this. The easiest thing would be to follow the dry ground, which I could connect patches of dirt and rock down the drainage, so I worked my way south and down, and upon looking at my maps of the surrounding areas saw that if I could walk the drainage out enough I would meet up with a trail, which would then get me to some roads.

And the walking was actually pretty nice once I got out of the snow. There weren’t too many downed trees, and the going was pretty easy, just follow the creek! I popped out on a road that wasn’t on my map, hmmm, it was most likely a get-back road for the Breckenridge ski resort I was near, and turned on the CDT Guthook app, fortunately that map had the road on it, and I found my exit strategy. Turning south I walked the road out, eventually reaching a neighborhood perched on the side of the mountain, and found highway 9 where I hitched a ride into town with Tim, a nice bloke who picked up the crazy girl. 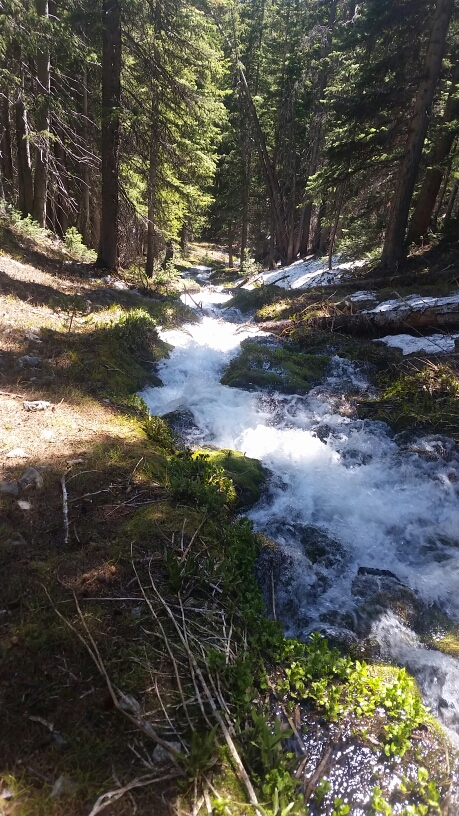 One chalupa and Dos Equis later and my belly was full and I felt a million miles away from that cornice on the ridge. I could see it all from town, I kept glancing up and marveling that I had really come over that. Man, the things thru-hikers do. This could be a premonition for what was to come for the route I chose, but I’m confident I can get myself where I need to go, and am not afraid to retreat if I need to. We’ll see!!

Teresa came a few hours later and we drove off to her place near Conifer, CO. But of course we had to stop for pizza first! We had a great time and tonight I’m tucked away in her uber comfortable bed in the guest room, a most welcome reprieve from the ground for a night!