It was a chilly morning when I attacked my first climb of the day. Fortunately the cool kept the sweat at bay and I was pleasantly surprised to see the trail was fairly level most of the day. Yes, I’ve hiked this trail before, but at 8 years since, I found there were many views I could recall, and many I could not. I was able to identify a spot I camped before, and even a spot I had found a toy gun placed in a bush at head level…that had been disconcerting, my 2007 fall hike had coincided with hunting season and I can only surmise the hunters weren’t too keen on hikers scaring their “game.” 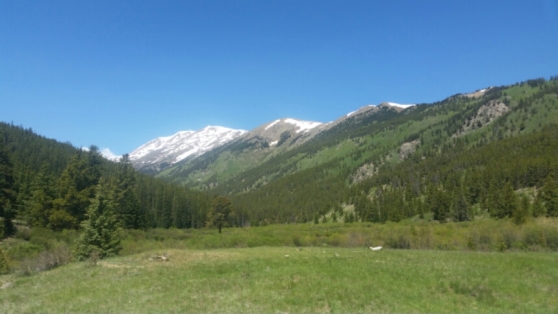 Oh Pine Creek, you sure are purdy

But it was a blissfull day. Camping with my parents at night means burgers, boiled eggs, and fruit for my trail food. A girl could get used to this! But I have them for 2 more days and then they head out. Hopefully this gold-carpet trail treatment will fuel me up for the next 2/3 of the trail. 5 months or so is a long time to be living in the woods…its nice to have a bit of civilization thrown in there.

I only had 18 miles to make today, so it was a relaxed day of hiking in the sunshine. I like saying that. Looking at the map and the fact that the trail brushed up against 11,800′ I was sure I would encounter more snow, but in fact the open canopies had already allowed most of it to melt off.

I met my folks at Clear Creek Reservoir and we headed to a Leadville campground for the night. I had planned to meet with Meagan, a former Outward Bound Odin Falls co-worker who now was placed at the Leadville basecamp for a beer, so relaxed for a few hours before headed out on the town with a bunch of other OB folks.