Another bad night of no-sleep. The cough has GOT TO GO. I will take care of it in Durango.

I headed back on the road a bit, I had scoped out a short-cut on the map, if I could cross the river in the valley and climb up the steep banks to the highway, I would only have about 4 miles to make it to Wolf Creek Pass this morning. I figured the snow melt would be at a minimum this morning and I would have the best chance of making it across.

I was just rounding a bend in the road when I heard a hoot and holler…The boys are back! Apparently deciding to go back up on the divide wasn’t the best decision they ever made, and in between moments when they thought they might die, they spied a bailing point to get out of the snow and onto the road I had been walking. I was relieved to see they were ok, and as they were regaling me with chilling tales of their snowy feats, I felt a sense of accomplishment that I had made the smart decision, the right decision. There is too much trail up ahead to take risky risks in these mountains. To enjoy the trail I need to not feel like I might die several times a day. But hey, that’s just me.

The guys had already scoped out my short cut idea, and informed me it would be a bad idea to cross. Ok, bummer, our other solution was to walk 3 miles to where the road intersects the highway, and then back up 7 miles to the pass. BLAH.

We had just enough time to hike fast to make it to the pass for 10am when I had arranged to meet Whiptale.

I had made it before Whiptale, and threw down my pack and went over to inspect the sign. THE CONTINENTAL DIVIDE TRAIL. We don’t get much recognition on this trail, and this sign made me glow with pride.

The guys made it up and Mark Trails noticed a can of diet soda perched on the concrete..surely forgotten by some passing tourist, but OH WONDERFUL DAY, it was full and unopened!!! Trail Magic!! We did a little dance and carefully opened the can to share it among the 4 of us. Trail Magic!!! The little pleasures are so so sweet.

Then Whiptale drove up and out popped First Man! He had been hitching in Pagosa Springs, intending to head to Alomosa, when Whiptale drove by. I had been a bit worried about him as he had entered the mountains 2 days before we did, without snowshoes. I had suspected the 30 miles of postholing had been him, and I was correct. He was beat up and ended up spending 24 hours in his tent one day to wait out a storm. Embrace the brutality!

Now there were 5 hikers and our Trail Angel that needed to fit in the Suburu. But we did it with Mark Trails snug as a bug in the back of the car with all our packs. Ha!

We stopped in Pagosa for a huge lunch and we learned it was Whiptales birthday today! What a guy to drive up and pick up a bunch of smelly hikers on your birthday. So lucky to have a friend like this.

Oh the land is so green and lush. Wow. Before we knew it we were in Durango and settling into our rooms. Showers and lounging and getting ready for the night…Whiptale’s band, Running Out Of Road, would be playing a show at the Balcony. The bluegrass band was made up of fellow adventurous folks and amazing musicians.

The thru-hikers descended on the bar and danced, reveled in the sights and sounds of modern life, and I even got to catch up with Amy, my former boss at Southwest Conservation Corps…I had lived in Durango 8 years ago for a few seasons to lead trail crews, and it felt good to be back on my old stomping grounds. 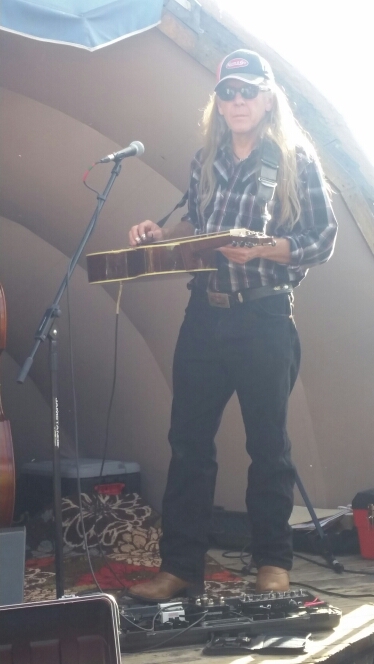 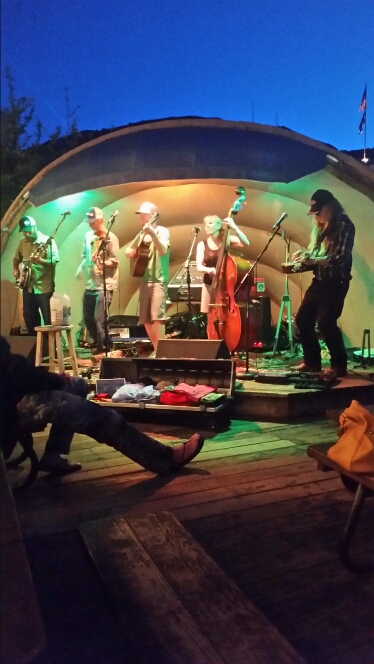 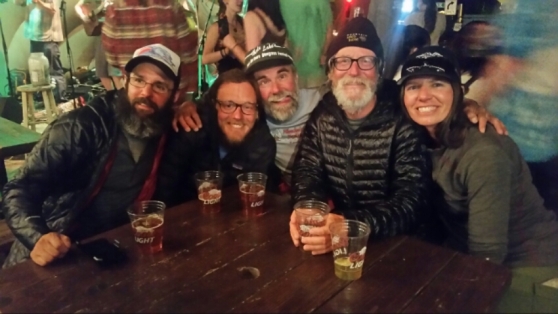 Durango, you are amazing!