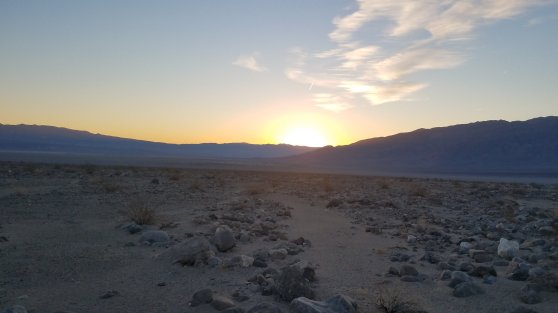 We have been getting up in the dark and walking around first light, mainly to avoid some of the heat. Even though it is November, day time temperatures can still get in the 90s, and since we dropped 4,000′ yesterday, we are almost at sea level, and in for real heat. We were walking as soon as we could see the ground, about quarter to 6. The entirety of our miles would be in the open, leaving the mouth of Marble Canyon on the large alluvial fan that spreads out towards Stovepipe Wells.

Stovepipe Wells is one of the only places in the park with a cell phone tower, and since it was November 7, I powered up my phone to find out some election results. Most of us were from Oregon and had races we were all following. Some elation, some depression, but the election results fueled our walking and conversations for a while. 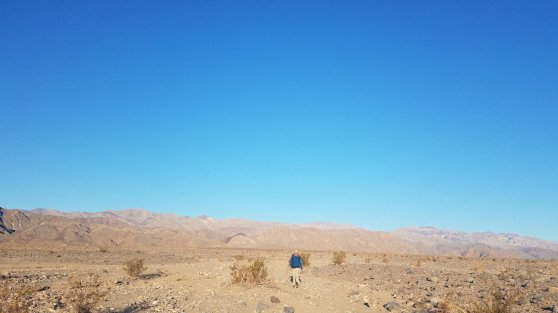 We were moving quickly between the debris and dry washes that fan out from the canyon. Up and down, in and out of the eroded banks, around and over the creosote bushes. As we approached Stovepipe Wells the bushes got bigger and bigger, soon they looked like jellyfish emerging out of the sand.

I spent a lot of the time talking with Bob, a Portlander. He had been president of the mountain climbing group in Oregon, the Mazamas, and had numerous great stories to share. John was also from Portland. Gary and Dan were from the Madras, Warm Springs Reservation area, and Skip and I from Sunriver and Bend…respectively. Only Kim was from out of state, and as a Nevadaer from nearby Pahrump, he was able to dive into these deserts and mountains on a regular basis. Jealous. 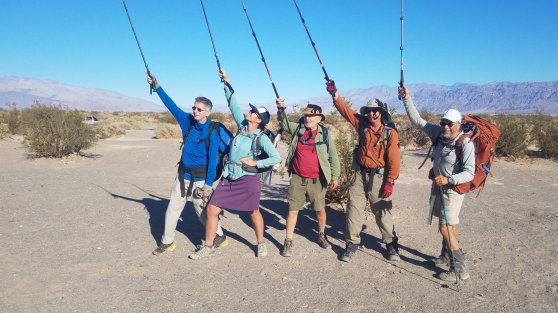 She-ra and her crew

The night before we realized we’d be done with the hike much sooner than originally thought, so instead of all going out for dinner tonight at the Stovepipe Wells restaurant, we might make it in time for breakfast. In fact, we rolled up on the campground where Dan C and Skip were waiting for us about 9am. We threw on clean t-shirts, and hobbled over to the all you can eat breakfast buffet. Oh yeah. It’s a universal pleasure to finish up a hike with a big meal, and our plates never saw it coming.

Most of the group had decided to start heading home today, and I had been playing phone tag with my good pal Amanda “Not a Chance,” a thru-hiker friend who is working in Death Valley this fall. We wanted to connect, but it happened to be her days off when I got back, and she was out exploring another canyon in the park. I decided that I wanted to hike Telescope Peak, the highest point in Death Valley, but first I wanted to play tourist.

We said goodbye as we all went our separate ways, and I got in the car to head to the visitors center at Furnace Creek. After dodging sweet-smelling tourists in the halls of the exhibits, I got back in the car to go see Badwater Basin, the lowest point in the park. At -282′ below sea level, this place was HOT and covered in salt flats. I stopped at the Devil’s golf course to see the salty cracks in the earth push up into interesting formations, then on to the white panes of salt that make up the Badwater area. I could see directly across to Telescope Peak, where I would be hiking tomorrow, if all went well. 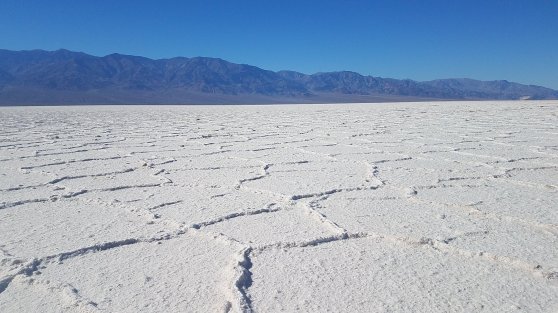 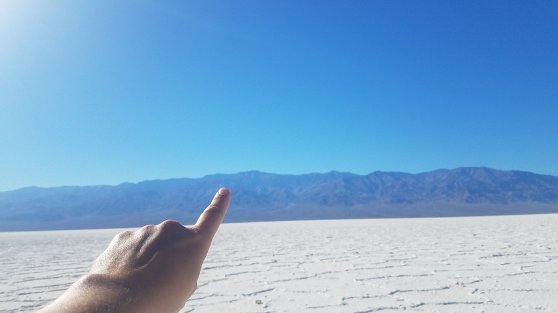 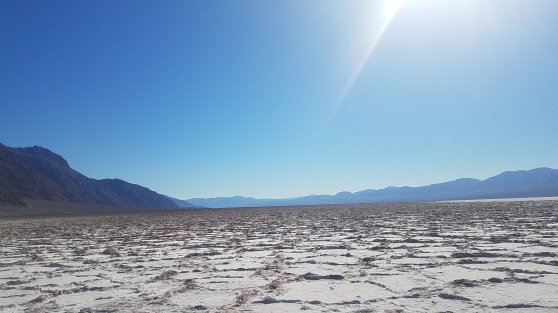 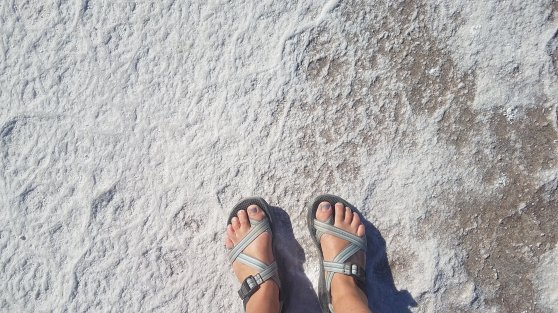 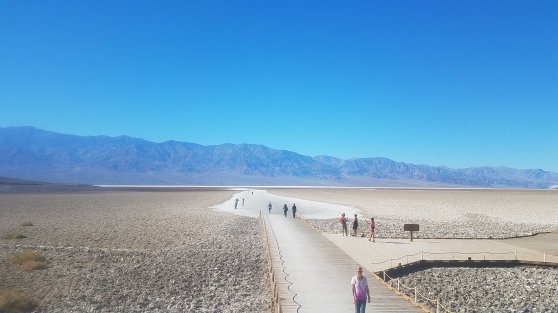 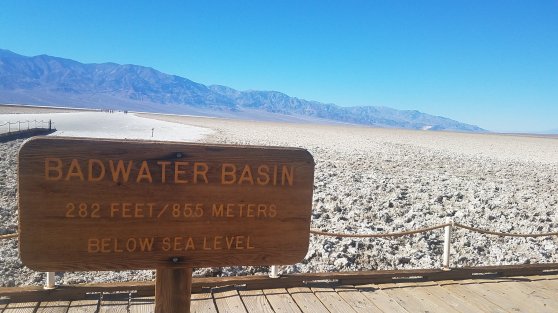 Then back in the car to drive all the way around the park, up the marginal dirt and rocky road to the Mahogany Flat campground at the base of the 7-mile climb to Telescope Peak. I made it all the way around before dark, and made myself a cozy little bed in the back of the truck with a dinner of cheese, meat stick, crackers, and wine. Glamping all the way! 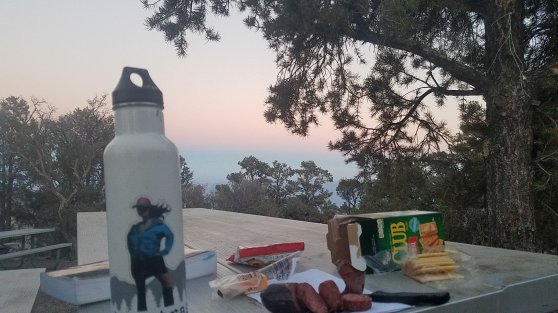 I did not sleep well and was up before light, as was our pattern this week. I made coffee and waited for the sun to crest the horizon and make the world much warmer. The campground was at 8,133′ and the morning was brisk.

I drank my coffee, and read a bit before venturing out with my day pack to start the hike. Seven miles up and back. I started walking at 7:15 and the trail was in great shape. It was sloped gently enough that I could cruise without too much effort and it felt so good to stretch my legs after a half a day in the car.

The ridgeline trail was visible when I rounded corner after corner, and I had an incredible day to be up on the top of the world. Badwater Basin was shrouded in fog, and I could see over to the Sierras and Mt. Whitney! There was NO SNOW on the Sierras, and that was a bit eerie for November. Little did I know a huge fire had broken out on the other side of the mountains and had devastated the whole town of Paradise. 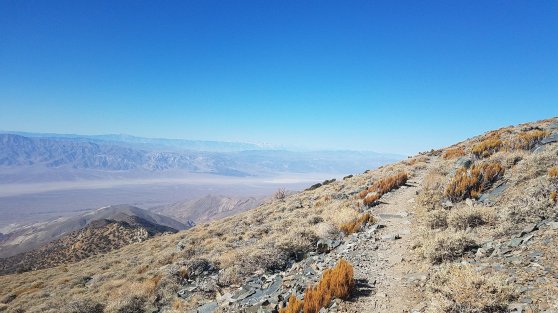 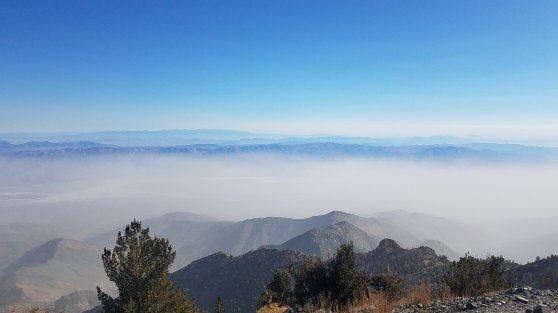 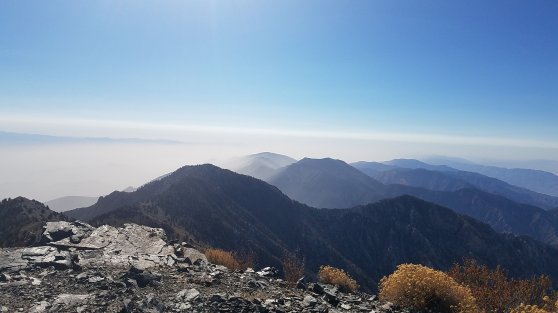 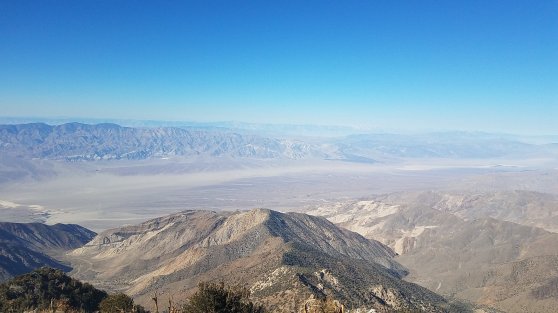 I encountered a whole herd of deer at one point, several being nice big bucks. And then some campers that were perched in one of the only spots a group could have camped up here. 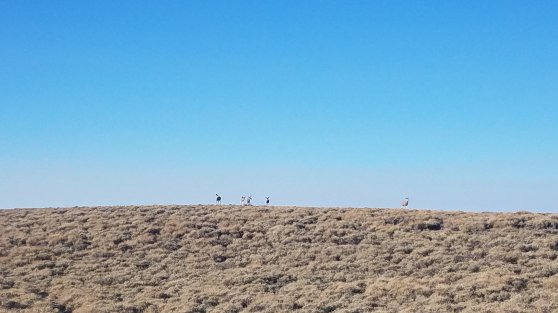 Then up and up and up. The trail started switchbacking, and I knew I was getting closer. I had yet to stop for a break, and wanted to keep pushing.

Finally, the top! Three hours to hike the 7 miles up to 11,043′, and I was the only one up there. I signed the register and soaked in the views for a few minutes, eating lots of snacks from my pack. It felt good to be alive. 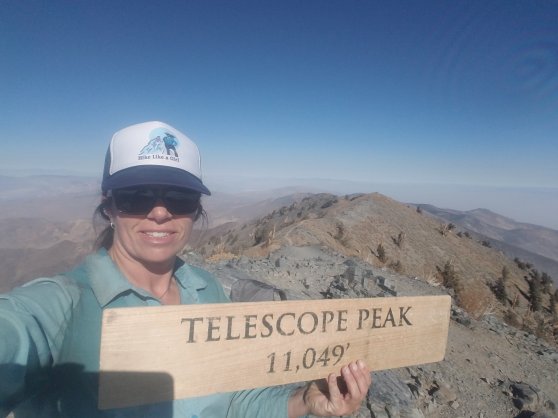 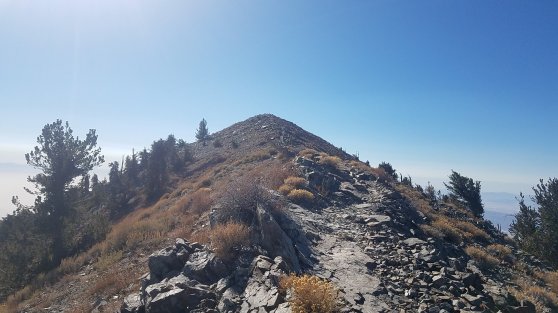 Then down. The way down went much faster, and I only saw one person heading up. It was a quiet day on the mountain. I guess the crowds of people I saw at the visitors center and at Badwater Basin are not mountain climbers.

I was back to the car by 12:15, and by then I had decided to head over to the base of the Sierras and drive back to Bend on the other side of the park. I cued up a few hours of podcasts, and spent the next few hours driving through the east side of the Death Valley park. (This place is enormous!) By dinner I was in Bishop, and decided to call it a night, finding a cheap hotel, delivery pizza, and the first shower of the week.

The next morning I weighed my options after a delicious visit to Erick Schat’s Bakkery. YUM. 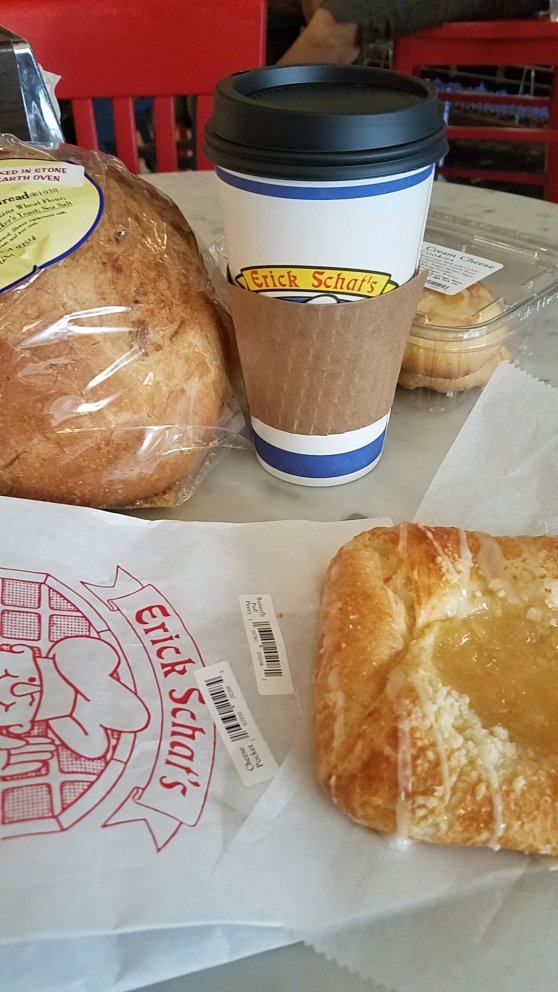 I decided I would try to find a theater playing the new film, Free Solo, about Alex Honnold’s free climb of El Capitan. The film isn’t playing in Bend, and I saw that Reno had a few showings, so drove up there for an early afternoon movie. INCREDIBLE film. So good.

When I got out and looked for a place to camp, I saw Bend wasn’t too far away. Maybe close enough to just drive home? Maybe?

So I drove home, getting back to Bend about midnight.