I slept so well down tucked out of the wind and exhausted from sub-par sleep from the night before, and the miles of yesterday. Before sunrise it started to rain again, and I knew our agreed-upon start time of 7am was less and less likely to happen. While on a thru-hike the need to constantly make miles despite the rain is really important, but on shorter hikes that need kind of goes out the window….however I wanted to usher people back to the shuttle cars waiting at Leslie Gulch before making the 3 hour drive back to their cars at Lake Owyhee State Park, and then home. Some hikers came out from SW Oregon & Portland, long drives!

I made coffee with my woodburning stove instead of getting up for the hot water Tim has been making us in the mornings…it’s nice to be self sufficient, especially when it’s raining! I packed up and was under Tim’s big shelter by 7am…and saw all the other tents still up. Oh well. I sat down to drink some more coffee and watch camp slowly come alive when the rain petered out.

In the first few miles it looked like I could take a short cut between two waypoints, so climbed up and over a ridge, to see we would have a steep-ish sidehill to get down the other side. The problem with shortcuts and topo maps is that you don’t always see those minor 5-10′ cliffs that the topo lines don’t show. We maneuvered down the slope carefully and started walking up our long ascent of the day. We would climb 2,000′ to the top of Juniper Gulch, before descending steeply down to Leslie Gulch. We took a break at the start of the steeper section of canyon, and relaxed a bit before the climb. 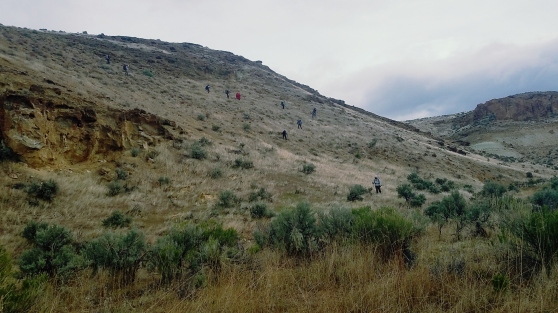 The rocks were stunning along the unnamed canyon, and I suggested that the hikers come up with a name for this canyon, as there was nothing on the map. We started up the more cliffed out section, but soon the canyon widened out enough that the climbing was quite gradual and much easier than I anticipated. Andrea picked up a rock and came up to us  in excitement, a thunder egg! Being the good geologist she is, Sarah had been carrying her rock hammer, so Andrea pulled it out and cracked open the rock as we all looked around in anticipation. It wasn’t a thunder egg, it was a geode! Beautiful crystals inside…Andrea said she found it in the drainage, so it probably washed down from some feature in the high rock walls. So cool! The geode broke into pieces, so many of us hiked out with a piece, and I saved one for MJ, one of the board members for Friends of the Owyhee who had been helping set up camp and such..it was her birthday. How about a birthday geode! 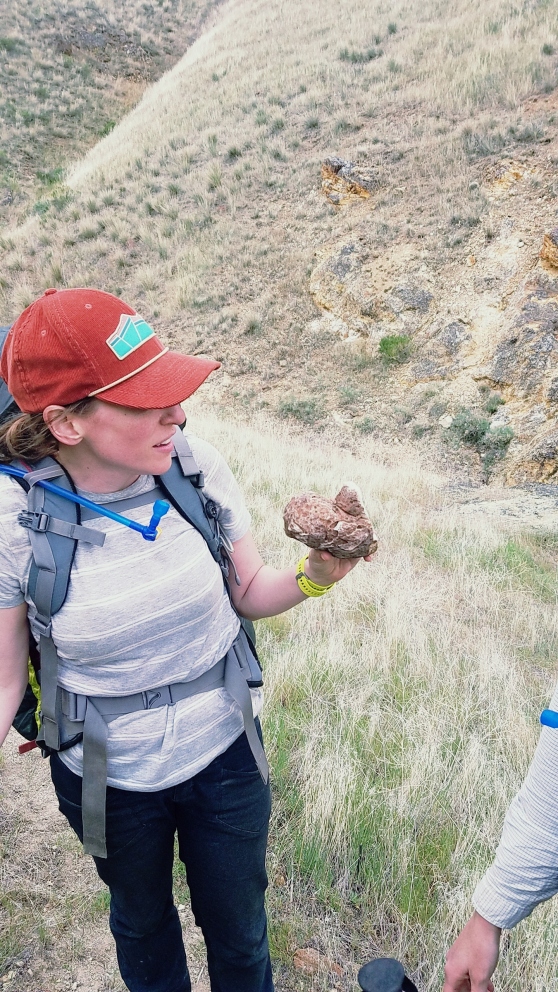 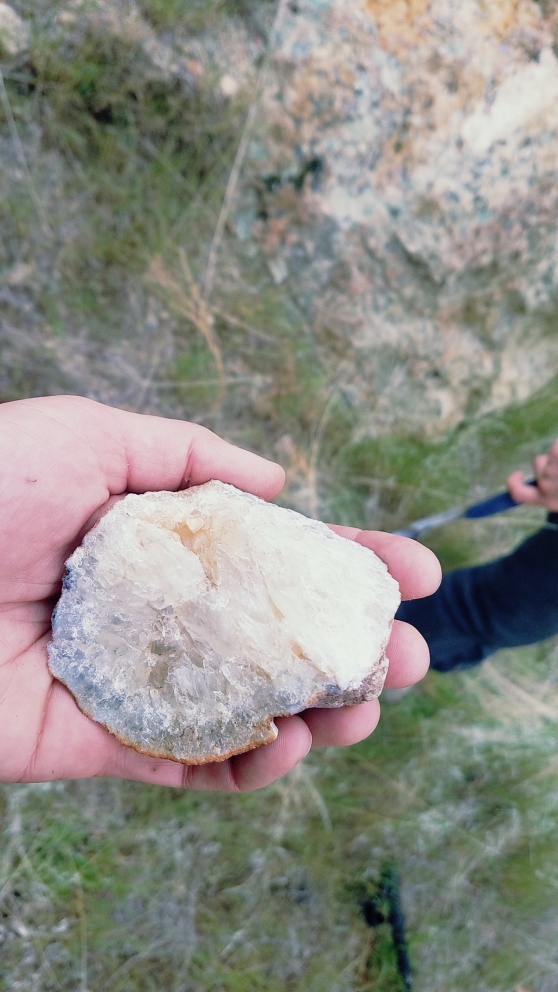 We hiked on, following very well defined cow trails. The cows made a better path than we could, and each time we came to a bend in the canyon, the cows would find the straightest line between canyons, making for a very efficient path. Now cows are a mixed blessing. I’m starting to monitor for human impacts along the ODT this year, but am finding many more animal impacts. I’m not sure how we will be able to determine that human feet made a path on a cross country section versus animal feet. I guess it’s easy to see from the poop who is using the trails! 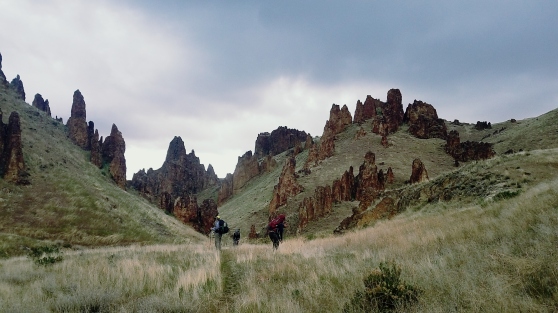 We stopped for lunch, but it was raining again, and it wasn’t long before everyone was shivering and we wanted to keep moving. The last of the climb went up an unnecessary few hundred feet according to the waypoints, but I followed them, and soon realized my error as the group was slowing and getting more and more tired. I could have kept following the drainage around before the climb, saving us a descent…another protip to hiking a route: hike smarter, not harder. If you see a better way that isn’t waypointed, go! We continued up the near-by drainage to the original ODT waypoints, and the group was slowing. I pointed out the last of our climb up to the right of a pointy rock formation, but it was still 1,000′ up. We took our time, again on some steepish sidehilling. There is lots of sidehilling folks! Be prepared…. 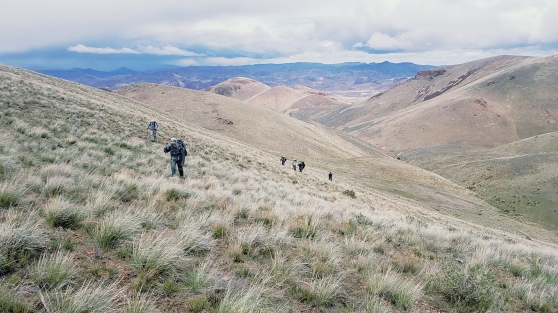 Finally we crested the ridge and dropped our packs by the lone juniper tree at the top. Someone still had energy, for Andrea climbed up to the highpoint with camera in tow and motioned us over. AND the group named the canyon we just climbed up…”Let ‘er Rip” canyon. I’ll include that in the next update 🙂 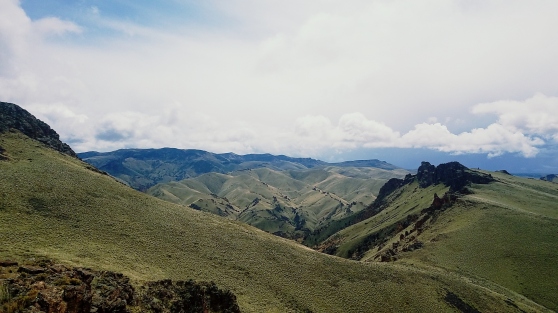 This is why we are here.

We had less than two miles to the cars, but a very steep descent had us slow going. The canyon is gorgous and the urge is to look around, but if you looked up from your feet, that could land you on your butt.

We inched our way down, and finally most of the group took off for the cars, and cold beer in the cars.

And success!!!!! We made it through without any major mishaps, lots of sore legs and feet, a few blisters, an epic adventure, and possibly some folks interested in doing another section.

I gave MJ her geode, and unfortunately she discovered a screw in her tired, so they had to change her tire before we could shuttle back to everyone’s cars. Another board member, Sammy, came out, so it turned out I didn’t need to make the shuttle run. I was headed to the Nevada border to meet an Outward Bound group the next day down in the Pueblo Mountains who has been hiking a section of the ODT, so it would save me hours of driving if I could just head south. We all said our goodbyes, and jumped in our cars for distant destinations.

Section 25 done! I plan to come back this fall and hike the other Owyhee sections I haven’t done yet because of my paddle trip in 2016, and perhaps we’ll offer Section 24 as a hike to folks next year. Stay tuned…