I’ve had a good amount of office time this spring, but I planned a trip to the Pueblo Mountains along the Oregon Desert Trail perfectly with a crew from Oregon Field Guide at the end of May. I’ve been talking with Danika, a producer for Oregon’s PBS outdoor show (and recently winner of 4 NW Emmy awards!) for the past six months about doing a segment on the Oregon Desert Trail, and had already filmed with them once on a snowy February afternoon near Bend. I’ve been watching Oregon Field Guide for years, and they’ve done a number of segments on long distance hiking, including one of my favorites on Lint, my favorite triple, triple crowner.

I had hiked through the Pueblos, a remote mountain range south of the Steens Mountain that juts up against the Nevada border, last year about this time, and remembered plenty of water, flowers and patches of snow. The weather at the end of May was glorious, and I hoped for the same this year. I met Danika, our camera-guru Todd, and volunteer and outdoors man extraordinaire, Vic, at Fields Station on a Monday night. I finished up my amazing milkshake from the store, and hopped in their car. We had decided to drive up a two-track road as high as we could to get closer to the route in the middle of the range.

It turns out all the camera gear is HEAVY, and the closer we could get, the better. It would also be Danika’s first backpacking trip! I tried to reassure her that our packs aren’t normally filled with extra batteries, microphones, and the such. We made it about 2.5 miles from the ODT at Ten Cent Meadows, and decided to make camp on a high ridge with an amazing view over to the Steens, Alvord Desert, and the north part of the Pueblo range.

Above is a video Todd shot of the sunset on our first night.

The next day we packed up all the gear, Todd having the camera bag/backpack that looked like one of the most uncomfortable packs in all history. It’s amazing where some of these Oregon Field Guide cameras have gone over the years. Apparently this camera was about 10 years old, and had been up mountains, on rivers, and just about everything in between. 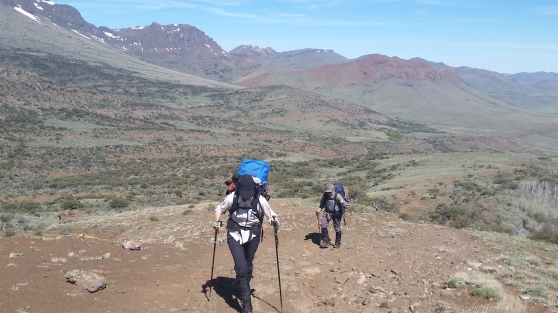 We found a sweet little grove of mountain mahogany to set up camp for the next few nights, and soaked in the views.

We did a little filming that afternoon, took a short jaunt on the trail, did a longer interview segment overlooking the Alvord, and retired at a reasonable hour.

In the morning we packed up, prepared to be out most of the day. The Pueblos section ties in to the older Desert Trail route that was established in the 1980s. The Desert Trail folks are working to build a Mexico to Canada desert route, and had already designated a few sections, including this one we were on. The Pueblos are a challenging cross country hiking experience that follows the ridgeline for much of the range, and the DTA built a series of 5-6′ cairns to mark the way. Many of these cairns are still standing, and we decided to hike cross country aiming for cairn 22 on a far saddle.

Right away we had some snow patches to cross, but I saw opportunity…opportunity to shoe ski! 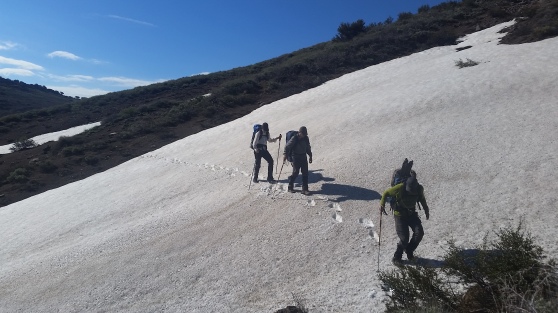 We did lots of takes in and out of the think brush, walking along the exposed slopes, walking up to cairns, it gives me new appreciation for all that goes into film projects. We made it to cairn 22 by lunch and tried to find shelter out of the increasing wind.

The hike back was a little quicker as we did most of the filming on the way in, and by the time we made it back to camp we were all ready for a siesta.

The night was WINDY and COLD and we were all in our sleeping bags well before dark because it was the warmest place to be. Welcome to backpacking Danika!

We packed up in the morning and headed back to the car, taking a shortcut because the crew was used to cross country hiking by now and saw a path that made more sense than the way we had come. The ODT is rubbing off on them already! The beauty of cross country hiking is going where you want to go…

We toasted our trip with beers and chips back at the car and packed up for the ride back to Fields Station. We hadn’t seen any pronghorn on the hike, so we were all on alert as we headed the 3,000′ down to the valley below. We spied a momma and her baby a head of us on the road, and I think Todd was able to get a little footage. The Pueblos are known for big horned sheep, but they must have been feeling shy for we didn’t see any on the trip.

Back in Fields we all devoured huge portions of food in the cafe and checked into the house we had rented for the night. We did a little filming in the store, and Sandy, Nancy, and the crew there were all good sports about it, even when I walked in and out of the store 10 times, eating a milkshake to get a good shot…we wanted to get some of the character and splendor of a place like Fields Station after hiking in the mountains, and I think the crew now knows first hand how delicious the food will taste and the shower will feel after being dirty for a few days. Hunger is the best sauce.

The next morning we returned for breakfast, and the biggest pancake I’ve seen outside of Seiad Valley on the PCT (pancake challenge on the ODT anyone??) 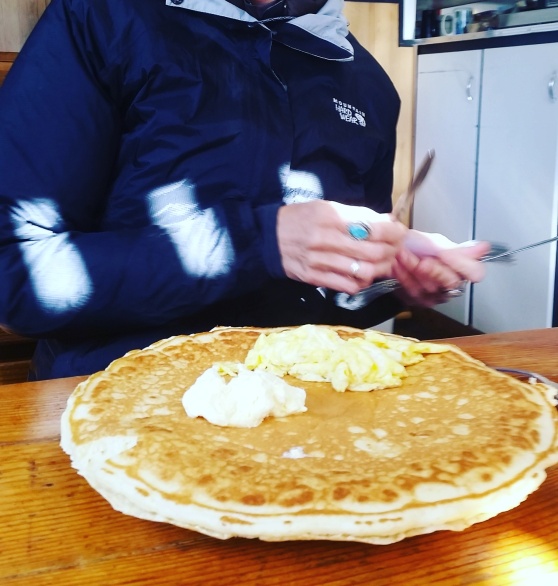 We parted ways, and I headed out to visit the family that runs Rock Creek Ranch between Frenchglen and Hart Mountain. I had a great visit with the Millers, and found out all sorts of interesting facts about the area and their family which have been homesteading in eastern Oregon for generations (whisky stills in some of the old canyons, tunnels in the mountains…)

I was headed to the Fremont to hike for a few days on the ODT and scout out a section I’ll be returning to with a trail crew at the end of June. I enjoyed some sweet ridgewalking, made lots of notes on down trees and tread that needs to be cleared, and had a chill few days on the trail, even running into Kat, a current ODT thru-hiker. 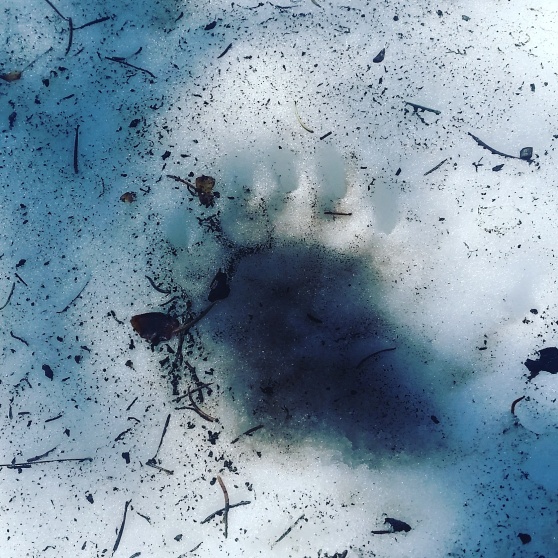 Shoe ski in the Fremont too

Not a bad week on the ODT!

One thought on “Hiking with Oregon Field Guide”