​I didn’t sleep well, actually I don’t think I slept at all. I don’t know why my body does to me. And i knew I had a big day ahead of me, climb 2,000 feet up to the top of the Steens which appeared to have snow, and then drop down 5,000 feet to the Alvord Desert with some gnarly bushwacking.

I saw the impending snowy wall get bigger as I hiked up, I was nervous my route might have a lot of snow, but the closer I got the more doable it seemed. I still had some ice and snow to contend with, it was mearly my snail pace that kept me plugging along.

When I got to the top, it wasn’t the top. Just kidding! There were a few false summits and by this time I was either walking on crusty snow, or slogging through drifts of a few inches. Still ok since I’m used to snow travel, but I wouldn’t recommend hiking this in November to many people. I had a few miles on the Steens Loop road where I got to see down to the desert below, so stunning!

As I approached the trail to Wildhorse Lake I was nervous the snow and steep trail wouldn’t be passable. It was getting icy and i had to walk through increasingly deep snow drifts, but I knew the trail was south facing so hoped the snow would at least be soft. 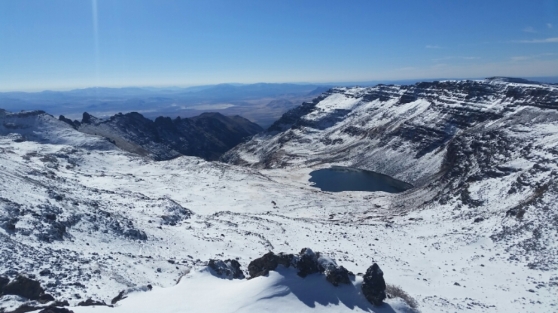 The first 5 steps were the worst and I kicked steps in. I could see the trail covered with snow, but there was a lot of rock showing, so I was reassured I could get myself down. It was after noon by this point and the snow was nice and soft. Yes!!

By the time I made it the the lake’s outlet I wasn’t feeling so hot. I think I had been driving myself hard this morning, and barely eaten anything, hadn’t drank enough water and was going on no sleep, so I took the next hour and lay down on some rocks…there was still snow all around. I couldn’t eat, which isn’t a good sign, but drank some drink mix and closed my eyes. I was starting to doubt I could make it another 10 miles down to the desert, but I finally got up and tried.

The first bit I descended open terrain and passed several waterfalls, but after a while the bushwacking got intense. Fireweed this summer had some particularly rough words for this section and I echoed her sentiment. It got even worse and couldn’t tell where I was supposed to navigate around some huge rock formations and lots of loose dirt. I just didn’t get this part…will have to see if anything else makes sense here. I finally saw the big cairn that marked my last pass; remnants from the 1980s Desert Trail route. Soon I was cruising on a dirt road. Man, there is nothing like some intense bushwacking to make you appreciate a dirt road! I was feeling much better and was able to eat my lunch at an earlier break.

I flew down the road, and at Tuffy Creek took a road that wasn’t on my map down to the Alvord Hot Springs. It was after dark when I got there and was thrilled to find soda and chips for sale. Electrolights and salt!!

I checked in for a campsite and chatted with Rose the caretaker for a while. Then set up my tarp, ate some mac and cheese and went for a soak in the hotsprings. Bliss!!!!!!!!!