​It was a cold night. I had washed my 20 degree sleeping bag before the hike because it wasn’t feeling that warm lately, and I knew I would need every down feather to be doing its job on this hike. I woke in the night, probably because of the impossibly bright full moon, but also because I was cold. I checked my water, it hadn’t froze, so that meant the bag was still a few degrees shy of its label. I put on my down jacket, and that helped tremendously.

When I woke next it was just after 6am. I sat up and made coffee before anything else. With coffee I could start the day. I was still cold when I started, but soon I was climbing and needed to shed some layers. The morning was brilliant and along the 7,000’ Crook Mountain, and I could see back to where I had started three days before, where I had been yesterday along Abert Rim, and ahead to where I would go. Where else can you get this perspective?  I love it!

There was blissful ridgewalking to be had today, and I relished every minute of it. By mid morning I had made it to the junction with the Crane Mt NRT and headed south on my alternate. Soon it became clear that where the route had been drawn on the map was not where the trail went. Yes there were trail markers, and yes, there was trail, but the map hadn’t gotten the info and thus my estimated milage to my destination would be off.

I was planning to stay with ONDA members Cam and Christine in their rental cabin tonight, and I wanted to get there in time to soak up the place! I started to get a bit nervy when the route snaked again, adding more distance, not knowing how many miles it would really take me to reach their place.

The walking was great though, and I appreciated being on trail. 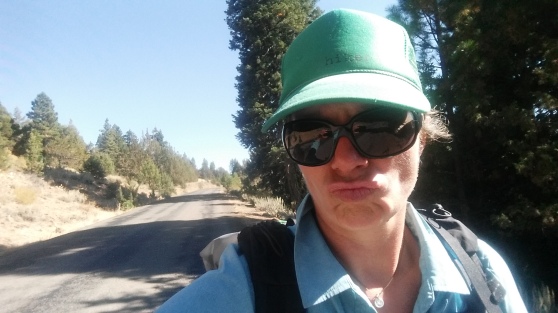 After lunch where I was fuming a bit, I decided to put on the 3 hour episode of the most recent Trail Show podcast to take my mind off the hike, and it worked. I love those goofballs, and in fact got a message from POD asking if I would be a part of their next show which would be taped at the gathering at the end of the month.

The gathering is an annual affair which gives triple crown awards, hosts presentations about epic adventures, and is simply a gathering of avid long distance hikers. I’ll be getting my triple crown award there this year, so am STOKED to go right after I finish this hike.

So I kept hiking, and without too many extra miles (only 3.5 it turned out) I was at my destination.

Cam met me and showed me around, and had even left a few beers in the fridge! Now he must know the way to a hiker’s heart!

He had invited me to dinner and I enjoyed an incredible evening with Cam and Christine. We had so many thing to talk about, and not just that we both subscribe to Harpers Magazine, or that Christine and I both went to college in London, but on a whole range of topics. They gave me some great book recommendations, and I marveled at their beautiful straw bale home.  I look forward to coming back with Kirk and exploring the Warner Mountains more.

Cam made some chocolate chip cookies to take on the road, and now I’ve got the fire roaring in my cabin and it’s almost time to sleep in a real bed. Yes.

Looking for a new stove system this year? I reviewed the TOAKS Titanium alcohol stove and pot stand/wind screen on my blog: sherahikes.com What do I like about it? -It’s light: Stove – .7 oz, TiStand – 2.5 oz, 550ml Pot 2.6 oz, equals a total of 5.8 oz for your entire cook system. (the whisperlite stove ALONE weighs 15.2oz) - It’s efficient: 300ml of water boils in under 4 minutes - It can turn off: the lid snuffs out the flame - It’s sexy: the clean and simple lines and look of titanium are very visually appealing to this designer - It’s affordable: The stove retails at $39.95, the TiStand at $24.95, and the 550ml pot at $33.95 NOTE: alcohol stoves are not appropriate or allowed everywhere, especially in fire restricted areas. Please research if they are allowed before your backpacking trip
Great crowd last night for Wild Rivers Night in Bend 🤗 lots of great adventures shared on the stage, and more rivers added to my wish list. These remote wilderness packraft trips may be difficult and slow going, but the journey is the destination.
Visors are back!! Embroidered loveliness available in Royal Blue too. Shipping to Europe meow!
Hikertrash
Got @calliehikes's zine in my hot little hands. 🤗 love how some put their love of words, creativity, and hiking together 📖 bookworms unite!
It was so fun to work with Anish on her new logo redesign! This lady is inspirational in so many ways. Check out what she is up to over at @anishhikes 🤩
Favorite piece of gear...especially when it's too cold to drop trow.
When healthy tastes good 😃
Ready to paddle. We've got some fun packrafting planned this year...can't wait!