I woke up before the sun and made quick order of the morning. I may not know how many miles it was to the end point of the reservoir at Indian Springs Campground, but I was going to make it there. Determination had me in my boat by 6am. I took my coffee to go and had it perched between my feet so every so often I would take a 5 second break to re-up my caffeine levels.

The water was utterly still in the morning, and I made good time, paddling steadily north, only taking a few seconds to drink coffee and stretch my hands which were going to be stuck in a claw grip by the end of the day. 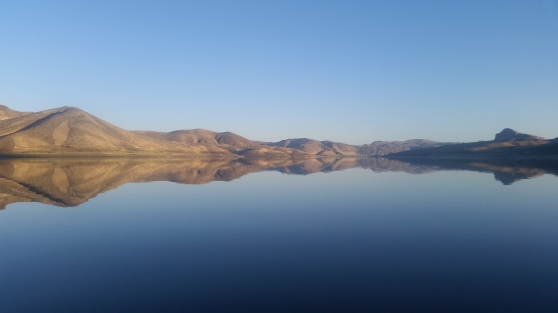 The wind remained at bay most of the morning and I motored along, marveling at my surroundings as I steadily paddled. About 11am I passed a big group of houses…only water access here and I started to see more motor boats coming and going. I think I was still about 12+ miles out, and would TOTALLY live here if I had a chance. How cool! I had paddled past a house where someone had waved at me, and a short while later the man and his dog show up near by and slowed down to talk. 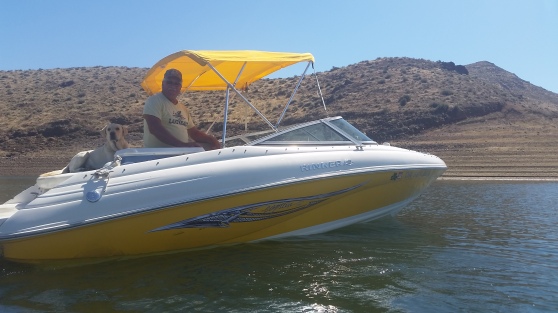 Dave and his dog Clue had spent a few days at their cabin and were heading home that afternoon. He gave me some cold water, and we shared a beer there in the middle of the lake. Dave told me they didn’t know why all the fish had died this year and the water didn’t recede any faster than it normally does. He also mentioned a large algae bloom was the blame for all the green slime in the water, again, folks weren’t quite sure why that had happened either. Change is a foot in nature! Dave offered to give me a ride to the end, but I wanted to get there under my own steam, so thanked him and was on my way again. It was the longest break I had taken all day, and was grateful to give my arms a rest for a minute.

As soon as I turned the next corner the wind hit me full force. What I didn’t realize was that I would be paddling into the wind for the next 5 hours. Ouch. I gave the paddle another hour before I pulled over and tried to eat something and lay on the rocks in complete exhaustion. But I couldn’t stop. Had to keep motoring, and now that I was going against the wind I had to paddle harder and longer to go the same distance. THIS is why I was hesitant to paddle in the reservoir. But here I was and any pause to my paddling rhythm had me getting blown backwards. Curses!

I went into machine phase. For the next solid 5 hours I paddled. I paddled and tried not to think about the pain stretching through my shoulders, the fact that my wrists and elbows were straining under the repetition. With each stroke I would try and stretch my fingers a bit to give them a break, but I couldn’t stop. I had to keep going.

I’m not sure where my mind went during those hours. For a short while I sang whatever songs I could remember the words to really loudly into the wind. That helped. Then I tried to listen to some music on  my phone, and then just didn’t think at all. I was the paddle. I was the wind. I just was.

I continually checked Gaia to see what the most efficient route would be. Without it I surely would have taken a detour into one of the many arms of the lake, it was hard to tell what the route should be, so THANK YOU gps app. I made a pretty straight shot. When I finally knew I was getting close it was hard to keep up the rhythmic motion, I so badly wanted to stop. Finally, finally I saw the rocky jetty just behind Indian Springs Campground that was the official ending point of the Oregon Desert Trail. I thought about getting out and climbing up on the rock as I floated by, but then just figured I was close enough! 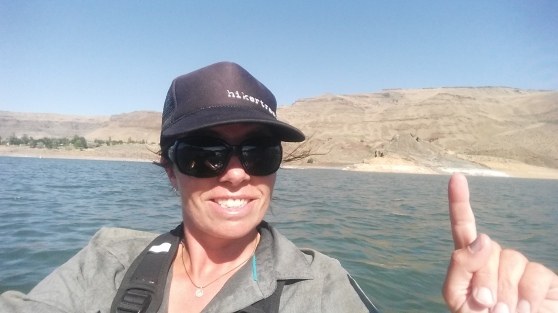 I reached the boat ramp at 4:45pm and even though I wanted to collapse on dry ground, if I had any chance of hitching out of the lake I would need to keep moving. My exit plan was simple. Catch a ride to Vale or Ontairo Oregon where there was a bus that left each morning at 9am for the trip to Bend. If I could get a ride to town tonight, I could be on the bus tomorrow and home. If I had to wait until the morning to get a ride, I would have to wait another whole day for the bus. Granted that wouldn’t be all bad…an air conditioned hotel room, probably some delivery pizza…not too bad at all! But I was eager to be home and have a few days to relax in my own space.

I deflated my boat, packed up everything and started sweating up the hill about a mile where I found the first shady spot along the road, and sat down to see if anyone from either of the 2 close by campgrounds would be leaving. 2 hours later at 7pm I new the gig was up, and that I should make my way to one of the campgrounds for the night. I had finally been able to relax in the shade of that tree by the side of the road. In fact I was horizontal in the dirt, not caring a bit I was so tired. I made some cold-soak Backpackers Pantry pasta and played solitare on my phone, just content to not be moving.

But I wouldn’t get a hitch tonight. I walked back to McCormack campground, got a spot, took a shower wearing all my clothes, and dripped dry in the hot evening night. I was surrounded by RVs and looked quite silly as I spread out my Tyvek and cowboy camped. No car, no RV, no tent. Just me and the dirt.