I slept badly…the night has so much power to dictate the day! Clouds and wind picked up over night and the blue skies I had been enjoying the last week were covered in haze. 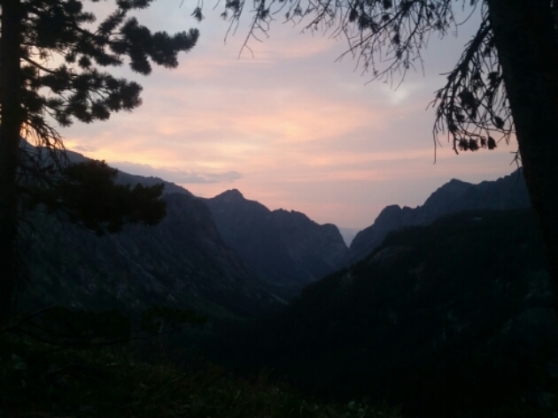 But it makes for killer sunrises!

I made my way down the Devil’s Canyon Shelf in the early morning passing tent after tent. So many people in the backcountry!

Soon I made a turn and started winding down the canyon below where I had camped. While still beautiful, the shelf had been where it’s at.

Finally after about 12 miles I emerged at Phelps Lake and walked the final mile to a trail head where I stuck out my thumb…I didn’t complete the loop all the way to Jenny Lake…to do so would have meant a 20+ mile day and I was eager to get to Jackson, shower, do laundry, figure out where I was staying and explore the town.

Two hitches later after a ride from a park ranger and local mushroom hunter, I was back in Jenny Lake picking up my bag and back on the road hitching south.

A climber from Massachusetts picked me up and poof, I was in the legendary burg of Jackson Hole!

First stop? A slice of pizza. Second stop? The Rec center where I took a shower, sat in the hot tub followed by another shower. I needed lots of water to help me get the deep dirt out. I would be spending the rest of the week around people and trying to make a good impression…be gone dirt!

Next up? Clothes! I passed a thrift store in the middle of town and soon had a new (to me) dress, skirt, and tanktops. The trail slipped further and further away with each hour in town.

Now where would I stay?

Meagan in Leadville had given me a lead on a friend of hers, and while I waited to hear back I wasn’t sure what to do with myself. The lack of sleep from the night before was hitting me like a ton of bricks. I was so tired I could have laid down on the nearest bench for a solid nap. Hmmmm, I decided it wouldn’t be weird to sit in the rec center hot tub or sauna with my eyes closed, so headed back over there.

I spent the rest of the afternoon there, and when I still hadn’t heard back from my contact, decided to activate plan B. When I met Beads a few days ago she mentioned that I could stay with friends of hers in town, so I texted her pal Tara, and just a short while later was headed to the apartment she shared with her boyfriend Andrew…in fact Beads was in town too!

Such great people, putting me up like that. Between Beads and I we had stuff all over the small living room, but they were most gracious!

The rest of the night we hung out telling stories and before I knew it, hiker midnight was upon us and I was ready to pass out.