Whew. I was dragging today. It might have been the HEAVY pack or the fact I didn’t drink much water over the last two days (maybe more beer than water?? oops.)

Alan and I left Santa Fe fairly early and got to Ghost Ranch just before 10. He decided to come hike a bit with me, and it’s the first friend I’ve had join me for an hour, it was really nice to show off the CDT, especially the amazing sandstone cliffs of that area.

We had a break and said our goodbyes and I headed up, up, up to thinner air. I was slow and dragging. Then i missed the trail for an alternate, but for some dumb reason I turned around instead of walking up the drainage….there was a very obvious way to connect back to the trail, but no. I turned around, and then got turned around again and wasted a good hour. Grrrrr.

I struggled up a bushwack to the top of the mesa and sucked eggs. And then made myself lunch of a pastrami bagel with feta cheese spread on a sesame bagel. That helped, so did the ipod I put on.

The going was slow and the old dirt track still muddy in spots from the torrential rain two days ago. I got rained on, but just a bit. Heard thunder, but just a bit. Was quite beautiful on top with glowing young aspen trees everywhere and cheeky little dandelions everywhere. I think dandelions might have a good chance at taking over the world…they are tenacious suckers. 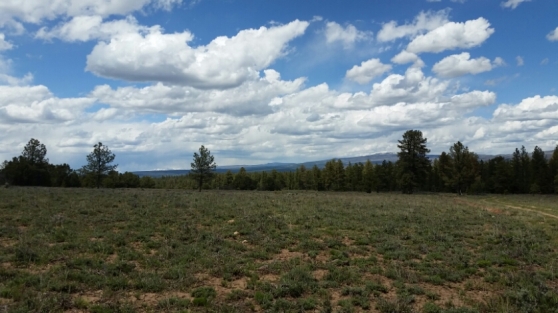 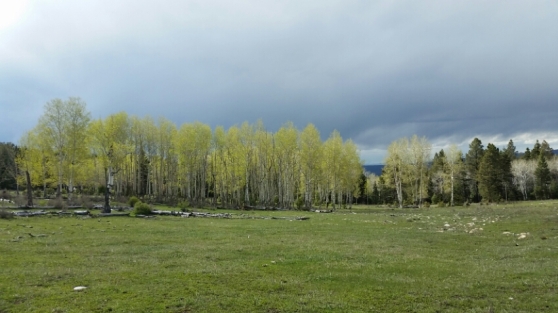 Anyway I made it to a spring and walked just a bit further to find camp…a bit early, but I’m exhausted and have no reason to push. It may snow tonight…heavy rain is forecast, and I have one more day of walking before I reach the postholing snow I’ve heard so much about. I can let the potentially sunny forecast for Wednesday melt off more of that stuff. I’ve got 8 hikers breaking trail one day ahead of me, so I can afford to hang back and rest up when I’m feeling so ragged.