Leaving home is bitter sweet, especially when you have an amazing man to say goodbye to for a while. But, as luck would have it, I had a few serendipitous encounters on the plane rides over to Tucson yesterday.

I sat next to the one person I knew on the plane ride from Bend to LA; I had worked with David Rosell on and off over the past four years at Cascade Publications, and had a great time talking adventures…he’s an avid traveler as well.

On the plane ride from LA to Tuscon, just as I was getting settled in my seat, my seat-mate sat down saying, “I’m hikertrash!” I was wearing my new “Ode to Ridgewalking” hikertrash hat, and as I got to know Michael I learned he had done big sections of the AT, the Tahoe Rim Trail and more. What are the chances that the one person i sit next to on the plane is another long distance backpacker?

The day gathered steam when I arrived in Tuscon and Dangerprone picked me up at the airport. I met Dangerprone and her husband Hawkeye on the PCT when I spent a weekend near Elk Lake giving out trail magic back in 2008. At the time I was planning to thru-hike the Arizona Trail the next year, so they immediately offered their assistance in Tuscon the next year.

In fact another couple I met that year, Slowride & Shake n Bake also lived in Tucson and had already hiked the AZT. Trail magic provides!

The two couples planned a hiker dinner last night, and as friends Allgood & Snorkel were driving in to pick me up for the CDT kickoff in Silver City, we had a whole crew of backpackers telling stories and drinking beer. Have I mentioned I love the hiking community? 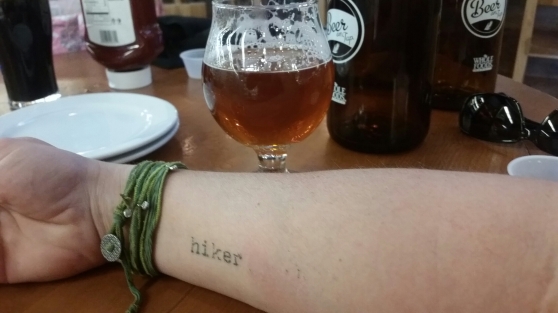 Now we are enjoying copious cups of coffee before our drive to NM. DUDE! EXCITED!

3 thoughts on “The Serindipitious Travel Day”