BY DAMIAN FAGAN for the Source Weekly

The Oregon Desert Trail, better known as the ODT, is a 751.7-route that traverses eastern Oregon, connecting the Badlands Wilderness to Lake Owyhee State Park. The trail slips through dense sagebrush steppe and ancient juniper forests, across lava flows and through canyons incised deep into an old land. There’s wild and wilderness and plenty of opportunities for solitude and solace.

“The story begins in 2010 when our former executive director Brent Fenty had the idea of connecting places where ONDA had been working in and to highlight some of the success such as the Badlands Wilderness and Steens Wilderness,” said Renee Patrick, Oregon Natural Desert Association program manager who oversees development and stewardship of the ODT. “In between those two areas, we have done a lot of conservation work and thought we could help people connect to this landscape through a trail or route and help them see these lands first hand.”

Descriptors such as the Oregon Outback, High Desert and Sagebrush Sea do justice to this desert landscape of sweeping vistas, rolling hills, fault-block escarpments and deep canyons.

As Patrick puts it, “You’ll see more pronghorn than people.” The concept of spending time exploring and getting to know this remote section of Oregon may be foreign to some more accustomed to exploring the Cascades, Oregon’s verdant spine. However, the desert landscape’s subtle beauty reveals itself to those who wander.

Author Ellen Waterston writes about living in and exploring the High Desert in “Walking the High Desert: Encounters with Rural America along the Oregon Desert Trail.” When asked about her experience, Waterston said, “The high desert is inscrutable at best, but during the winter especially so. I relish the palpable sense of all that’s brewing beneath the surface of the desert’s vast expanses. And while I’m waiting, nature puts on a show: hoarfrost exquisitely tracing the slimmest blade or branch, a coyote plowing its snout through the snow as it tries to rout a rodent out of hiding or pronghorn kicking up a wake of wintery glitter as they speed across an open savannah carpeted in white.”

The task of designing the route fell to Jeremy Fox, Patrick’s predecessor. He began the arduous task of sketching out the trail, utilizing existing resources such as trails, two-tracks, dirt and paved roads for most of the route. Private property and highly sensitive wildlife areas or habitats were skirted. Blank spots on the map were connected by cross-country travel; nearly 35% of the trail includes trailless sections where a hiker’s navigational skill will be challenged. 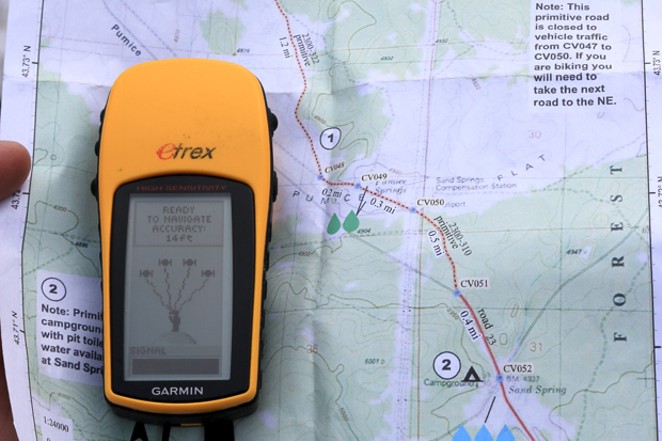 “Long-distance backpacking is not a traditional pastime in eastern Oregon in the desert,” said Patrick. “There’s a lot of curiosity and disbelief.” Patrick has worked hard at informing land and business owners about the trail that passes by their properties and towns. Now, landowners living in the outback have a different take for Patrick. “They don’t ask why; they tell me stories of hikers that have passed through—so it’s really rewarding to see that trail culture developing.”

Whitney LaRuffa hiked the ODT with a couple of friends in the fall of 2018. “I picked that trail because it’s a part of Oregon that I’ve visited and always wanted to see more of,” said LaRuffa, a seasoned long-distance trail hiker and vice-president of sales and marketing for Six Moon Design. “There was a true sense of adventure hiking the ODT compared to some of the more established long-distance trails that are more plug-and-play,” LaRuffa added.

For LaRuffa, it wasn’t just about being a thru hiker. “People we met along the way were all very friendly, making sure we had food and water and that we knew where we were going,” LaRuffa said. After his hike, LaRuffa spent time on an ONDA trail stewardship project, giving back to the area he had passed through.

Though the trail exists to hike in its entirety, day hiking or shorter overnighters are possible. ONDA provides excellent resources such as maps, GPS waypoints, information about water resources, and other trip-planning details on its website, along with information about the wildlife, geology and history of the region.

Central Oregon day hikers looking to go somewhere COVID-19 safe may enjoy exploring unique geologic features in the Christmas Valley and Fort Rock area or “the backside” Pine Mountain. ONDA also initiated the Badland Challenge to encourage exploration of over 50 miles of trails in the Badlands Wilderness, located just east of Bend, where the ODT starts or ends—depending upon your sense of direction.