I woke up at 6, but turned over and went back to bed for another hour…who gets up at 6am any more? It’s not light out!

After a morning spent resupplying and trying to shove 7+days of food (my longest carry to date on this trail), Mountain Spice and I hit the road.

Since we had walked to Lincoln, we would walk out in order to “connect our steps” from Mexico to Canada. We found a route up the highway a bit then on a dirt road to a trail to the CDT. We were walking along when a car pulls over…is it? It is! Andy Martin’s dad! I hadn’t seen him since Pagosa Springs where he had met Andy (also known as Pimp Limp) for a day off, and before that I had hung out with him in Ghost Ranch. He was going to go meet him at Stemple Pass that evening with a burger (lucky guy!). So that puts Andy about 2 days behind us…but it sounds like I might see him again in East Glacier for the Hiker Hoopla (an end of the season party for lovers of the CDT) in just over a week.

The road is hard on feet, and we took a few breaks to rest the poor suckers. Finally we made it to the trail head after a walk through a beautiful valley, thinking our trail up to the divide would be about 2 miles. 5 miles later and in the dark, we finally make it up. Phew. We found the first flatish spot and set up camp. 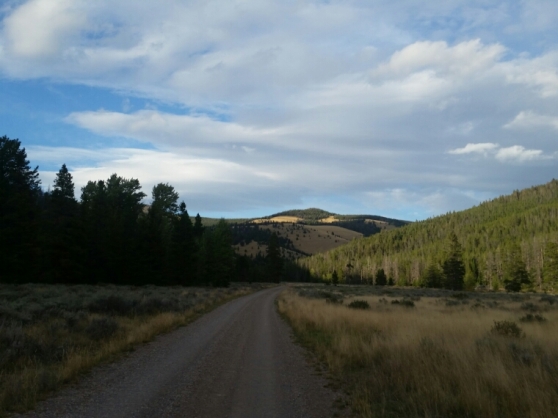 We are officially in one of the last stretches of the trail! Can’t wait to see what is up ahead and lighten the crazy load of food in my pack.